The typical characteristic of Gujarati mehndi designs is rich details and extravagant appearances. Intricate lines and shapes make the design extremely elaborate and complicated. Gujarati mehandi designs are thus more time consuming and difficult to make. Yet brides almost always opt for these since it makes their appearance more striking. The extreme patience required to make these detailed designs are always worth the end result which makes the brides’ hands and legs look magnificent, to say the least. Gujarati mehndi designs feature marvellous peacocks, leaves, flowers and other recognizable patterns. Many bridal Mehandi designs even include Gujarati style images of the bride and the groom! All in all these Gujarati mehendi designs while difficult to make are extremely beautiful to look at. 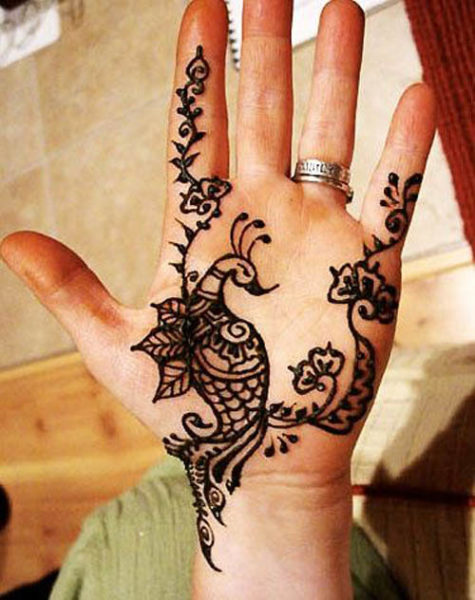 Elaborate peacocks filled with intricate details and patterns look exquisite when drawn upon one’s palm. Gujarati mehndi designs often sport such peacocks well supplemented with flowers, leaves and other shapes. However, as always it’s the thin detailing of lines and curves filling up the major outlines that make the entire design elaborate and extravagant. 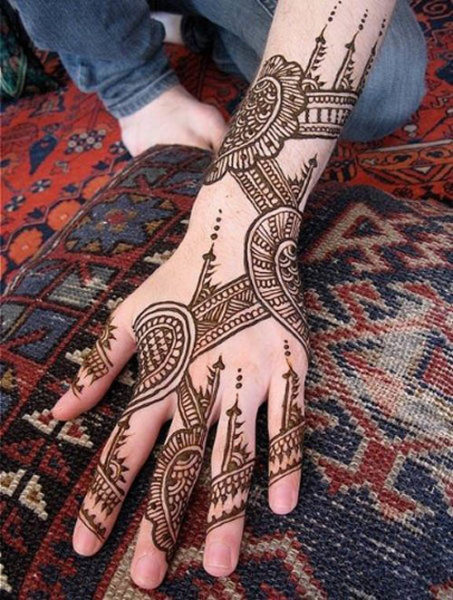 While normal mehendi designs almost always include floral patterns, Gujarati style designs often refrain from doing the same. A design with several geometric shapes and lines running across your hand giving the appearance of bangles and other ornaments looks smart. It has a less gaudy and more elegant look. Large circles are filled with thinner lines and dots. The overall appearance is abstract and cool. 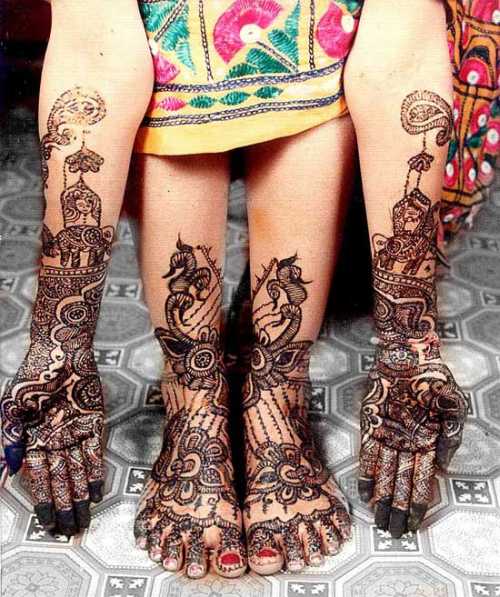 Bridal Gujarati mehndi designs are without doubt elaborate and excessively ornamental. They are large and do not leave much of your skin bare. The design includes floral patterns, decorated elephants that are part of the regular nuptial arrangements in many cultures, bride and groom images and other such wedding-related paraphernalia. The lines are sharp and distinct giving the design a clear cut outline. 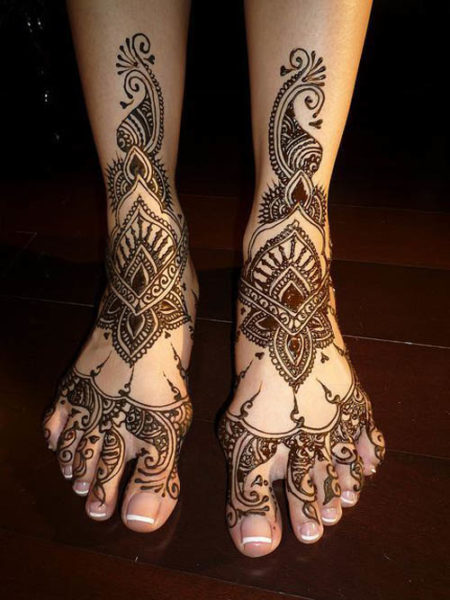 A Gujarati mehndi design running up your leg gives the appearance of a beautiful ornamental piece adorning your limb. Intricate detailing results in the design being both beautiful and elaborate. The patterns are well organized to make the major outlines look like anklets that are studded with gems. All in all its not a bad idea to give up the time required to get this design done. 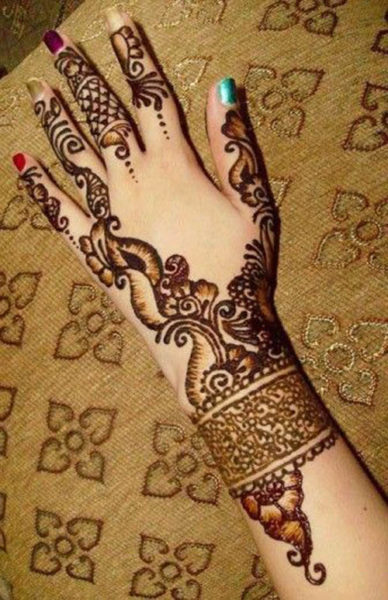 A plain or typical Gujarati design features simple bangle shaped patterns with a loop or line of flowers running down your hand, starting from one finger. As always the design is a depiction of the Gujarati culture and looks excellent. 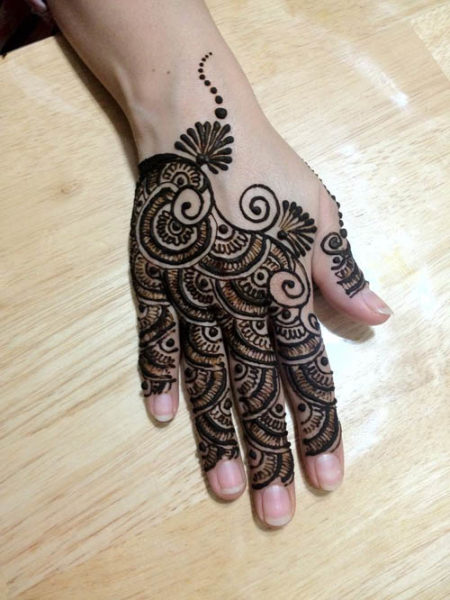 Gujarati mehndi designs are often very innovative and artistic. One such designs involve extensive use of spirals. A large number of spirals, varying in size, look vastly artistic when bunched up together. With a few well-placed dots and lines the design begins to look even more perfect. 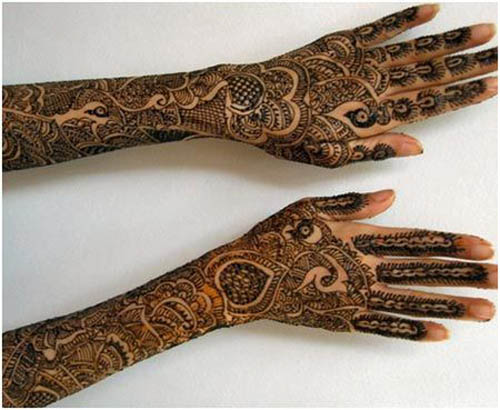 Elaborate Gujarati full hand mehendi designs are much like the bridal ones. They fill up all the space available with all sorts of lines and shapes. The ultimate effect is breathtaking. The extra detailing and intricate patterns make the design look like extravagant ornaments worthy of royalty. 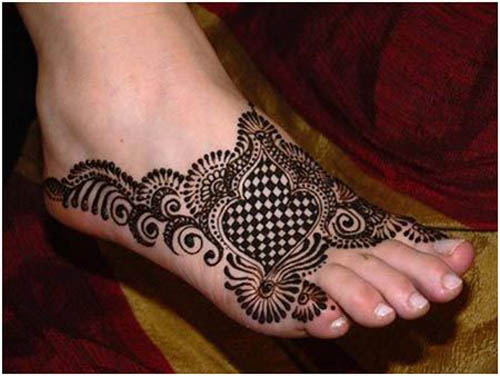 Gujarati mehandi designs are quite suitable for your foot too. The tangle of curves, intelligently put together, work as excellent tattoos even though it’s just henna. Depending on your choice you can make your mehandi design simple or elaborate in Gujarati style. 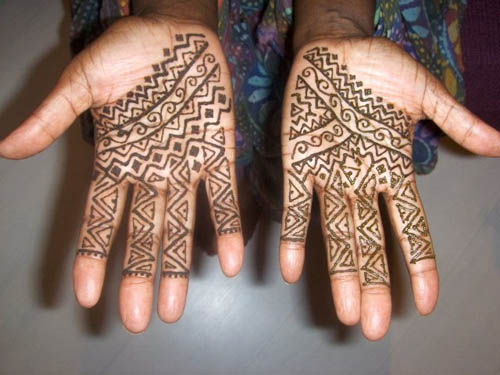 A simple Gujarati Mehandi design entails zig-zag lines and shapes well merged to form an abstract pattern. Simple as it is, it doesn’t take long to make. The overall appearance is less traditional and more tribal or funky. 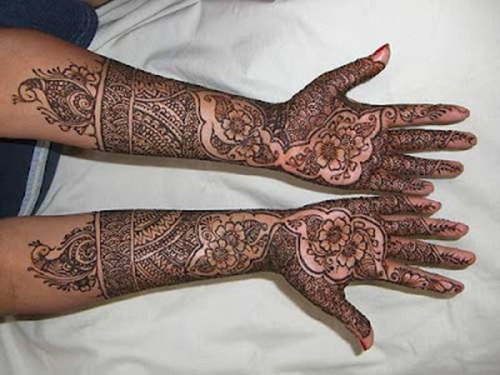 This is a highly intricate design. It is a design of flowers intricately woven amongst each other in an elegant fashion. Though suitable for all occasions this particular Gujarati style mehndi design is mostly opted for during marital occasions and any other important event. There is no scarcity of talent in Gujarat when it comes to mehndi design. Both men and women practice this art effectively and many use this art as their main source of income. 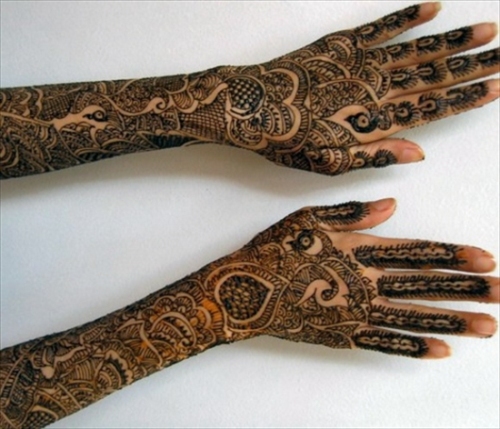 This full hand peacock feather design is an impressive and intricate work of art and a skilled hand is required to carry out such a design. Suitable for all occasions, it is normal for one to see the women of Gujarat adorning such intricate designs on their hands and feet on a daily basis. 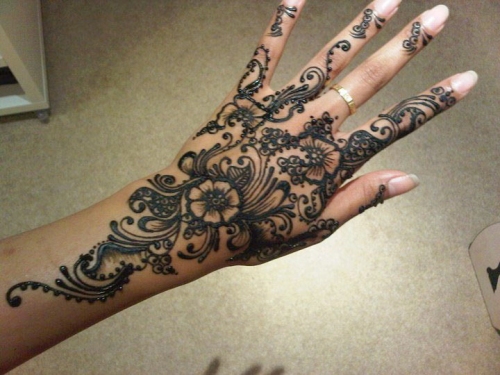 Impressively difficult but effectively beautiful this mehendi design of flowers woven around the hand is suitable for bridal ceremonies and weddings. It is not uncommon to see that even the smallest shops for mehndi designs in Gujarat can complete such designs with an air of finesse. 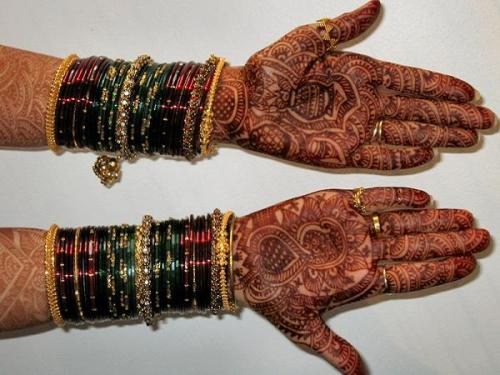 Traditional, simple but yet elegant this particular mehndi design is best suited for the bride on the wedding day. The design winds around the entire arm and ends at the shoulder. The Gujarati mehndi design is one of the most ancient arts of India dating back to the days of the Nawabs. Such art must be revered. 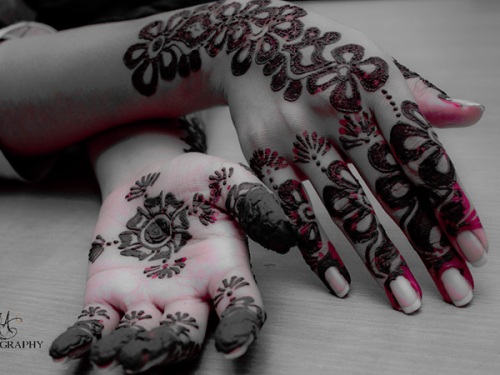 This is another example of Gujarati superiority when it comes to mehndi designs. With the use of henna which is completely a natural product, such a design is a product. Can Gujarat really be contended with when such designs are made every day? 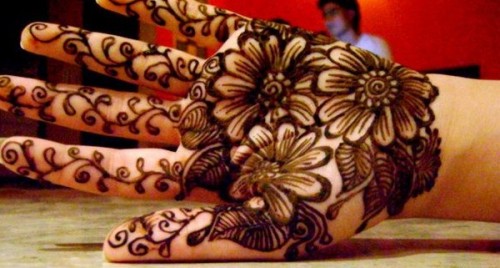 This pattern is simple but popular mehendi design is adorned by the young women in and around Gujarat. The flower is considered the base of mostly all mehndi designs thus the majority of flower designs present. The vines and leaves on the fingers complete the pattern. 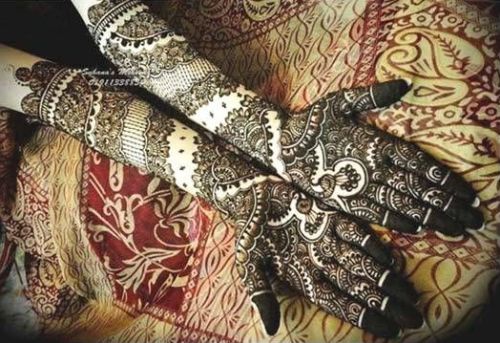 Black mehndi or henna is an alternative to the normal material used in the design. It is best suited for fair complexions and is impressively adorned by brides. This intricate work of art deserves its place in Gujarat’s best mehndi designs. Being a majority of peoples main source of income, people practice day and night to perfectness sum a profession that deserves its regality. 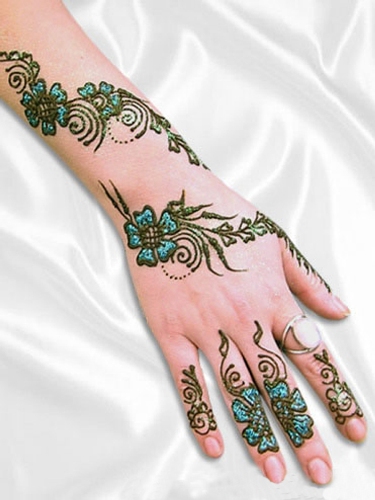 Different from the rest of the designs shown above this particular work of art uses a color that is not easily available and extremely difficult to copy. Only the most skilled hand can carry out such a mehendi design. 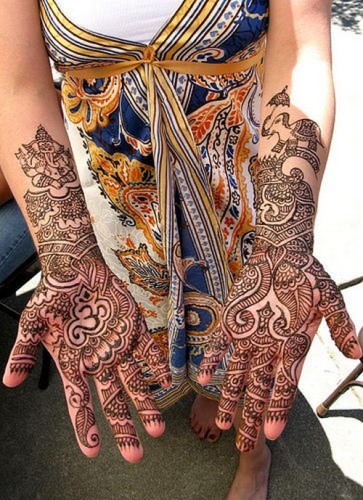 With lord Ganesha on the left and its carrier the mighty elephant on the right, this is another Gujarati mehndi pattern worth a mention. The religious symbol in the mid of the palm carries forth the spiritual essence along with the other embellishments. Gujarati mehndi designs should be appreciated for the time that is taken on one design. Sometimes artists sit for 8 hours straight just to complete one design.