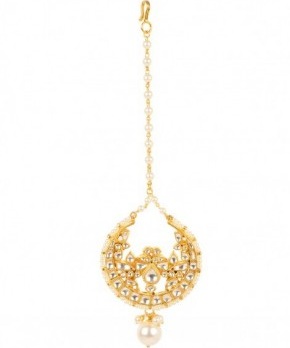 Jewelry has always been a best friend of women. Every woman likes to adorn herself with the unique jewelry designs. When we talk about the unique and best designed jewelry, ornaments, then the only thing comes in our mind is that the Kundan Jewelry items. Traditional kundan jewelry designs are very popular because of its ethnic and royal look. Maang Tikka is one of the most important ornaments in the jewelry collection as it is placed right on the head of a woman. Kundan Maang tikka is very popular among the women’s as it gives a regal look to the woman.

The Maang tikka can be the final touch to your outfit and will help you to make the style statement that you want to make. Here are the top 9 Kundan Maang Tikka designs those are running with the fashion.

If there is a talk of royalty in Indian bridal look then no one can deny the use of kundan jewelry. The perfect Crescent shaped kundan maang tikka having a work of kundan with the simple pearl drop at the end point of the crescent. It is a perfect tikka for those ladies those wants to carry a light weight maang tikka on their forehead. 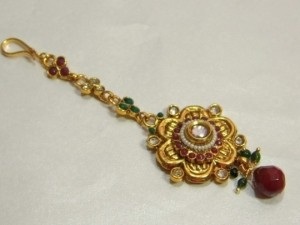 Stone Studded Maang tikkas are very hot on in trend in the category of kundan tikka designs, as they come in numerous designs and styles. One can find a different color of stone and crystals according to their outfits. The beautiful clear Stone Studded kundan tikka jewelry gives you a perfect appeal in your social occasions. 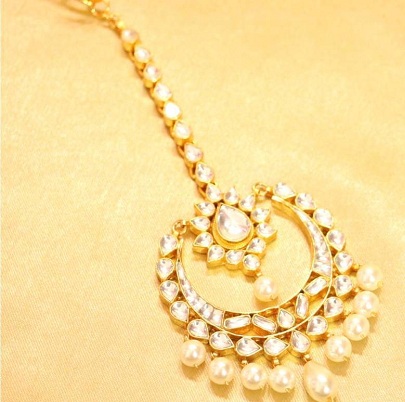 Pearl maang tikkas are perfect for any occasions. You can team it with your any traditional outfits and you will be set to flaunt a new style. This stunning pearl maang tikka kundan can transform you into a graceful and stylish diva. 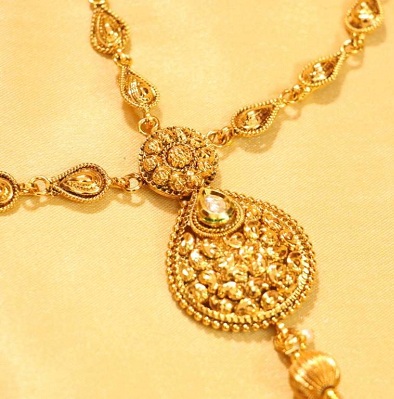 The Kundan Matha Patti consisting of two sided chains that hangs below the woman’s hairline. The middle chain leads to the pendant which falls in the center part of a woman. This is much capable to draw the attention towards your face as it lies around in the woman’s face. If you want to give you a royal woman look and want to make your day memorable, then this kundan matha patti can work for you the best. 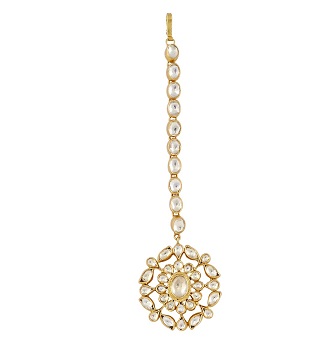 Flower looks and shapes are very popular among the Kundan tikka jewelry designs. The floral Kundan Maang tikka designed with the stones can be a signature of your own style. Pairing it with the other floral jewelry items can make you a woman of the day. 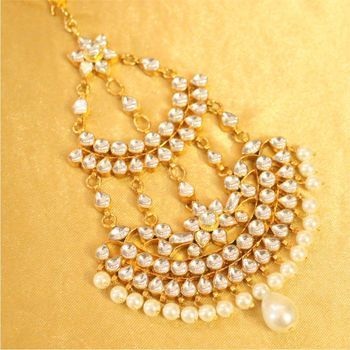 The double moon maang tikka kundan is made for a woman who loves it two ways. As it comes with the two half-moon shaped which sits gracefully on the head of a woman. The beautiful double moon tikka can catch the eye of the people who will love to appreciate its beauty. 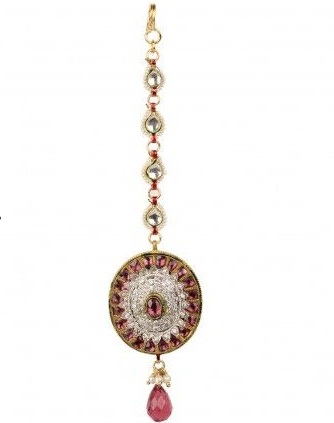 The pendant kundan tikka designs are a versatile choice which can be paired with any dress. The stone studded pendant with a tear drop pink pearl gives you regal statement that can give you a high class touches a modern Indian Woman. 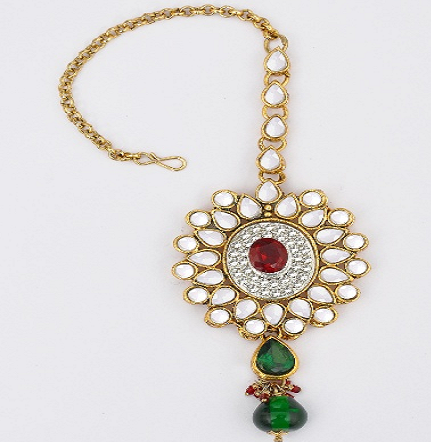 The large kundan maang tikka can make quick unique style statement. This Large kundan headpiece can help you to make a show-stopper of the show. But there is one thing about this tikka is that it mostly suits with the big and wide faces, if you have a small face we suggest you to go for the other ones. 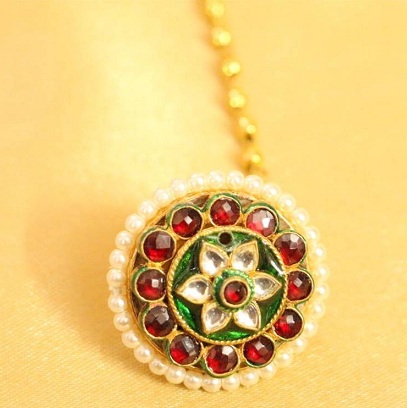 Get a sparkling look with this pretty round shaped borla maang tikka adorned with pearls beads and studded stones. The stunning Kundan borla make a woman’s look chic and glamorous. You can also hide the chain underneath your hair to highlight the beauty of borla alone.

No one can imagine a picture of the Indian Bride without a maang tikka. A maang tikka is an integral ornament to the Indian bridal jewelry. These days maang tikkas comes in various styles and designs those can jazz up your traditional look. This beautiful ornament for your forehead adds a touch of royalty and elegance to your appearance. Perfect Matching of Maang tikka with the ethnic outfits such as lehenga and saree, can add a glamorous appeal to your personality. So, enhance yourself for your special occasion with these Kundan maang tikka designs and let you give yourself a stunning look.