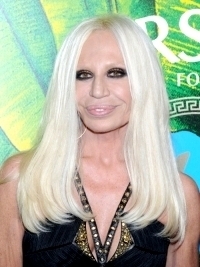 The world was ecstatic hearing the news that H&M will be collaborating with fashion empire Versace to create a gorgeous line that will feature iconic Versace designs at a more affordable price. H&M is known for creating stylish and affordable clothes for women of all shapes and sizes but it seems that for this line Donatella Versace didn’t want to have ‘real women’ shoot with her designs and wanted professional models instead.

Donatella Versace’s decision to cancel Versace for H&M shoot with real women has sparked various comments to appear and according to DailyMail, the publicist for the brand refused to loan the outfits stating that the models chosen for the shoot did not ‘fit (Versace’s) branding’.

Apparently, the three women chosen for the photoshoot were ranging from a U.S dress size of 0 to 6, and were all graduates living and working in New York City. According to Daily Mail, Fashion Director Liz Jones, the decision is not atypical. She told the publication that: “This is so typical of 99.9 per cent of designers: they only want their clothes worn by the very young and the very thin. This is because the clothes are probably not cut well, not in great fabrics, have no corsetry or intricate draping. It takes a better designer with more skill to dress women who have a bit of shape. I am very disappointed in Donatella, but it is true that female designers, with only the occasional exception, are just as inept as the male ones. H&M prides itself on being accessible to all. For Donatella to ‘ban’ ordinary women goes against what the high street store stands for. Shame on her.”

However, the models chosen to do the shoot will be featured in a cocktail party themed print wearing designs from esteemed brands such Michael Kors, Betsey Johnson, ASOS and Bloomingdales, designers which had nothing against having their items features on ‘real women’.

The new Versace for H&M collection has already been unveiled and the amazing clothes are just about to hit the stores in November 19, 2020. Would you have liked to see the designs modeled by ‘real women’?