The program’s method of 20 seconds of all-out work followed by just 10 seconds of rest has been making waves in the fitness industry since Japanese researcher Izumi Tabata first developed the system in 1996. But in the last few years it has spread rapidly.

This year, the Tabata system launched as a licensed exercise system in the United States and the United Kingdom, with Dr. Tabata himself as the figurehead. This wasn’t what he envisioned when he performed his original research, though.

“I had no idea it was going to be as popular as it has become,” says Dr. Tabata. “It has been very exciting, and I’m very flattered that the name Tabata has become synonymous with this form of exercise.”

So why bother with creating an official Tabata system? Just do an Internet search for Tabata workouts to see how many unofficial imitators have sprung into existence. Talk to people in the gym, and they’ll regularly use “Tabata” as a noun: “I’m just going to do some Tabatas.”

Some protocols which go under the T-name are true to the original principles of Tabata’s work, while others are just run-of-the-mill interval workouts. Part of the motivation for the new brand, says Tabata, was to dispel some misconceptions about the workout regimen and to ensure people do it properly to get the results they want.

With so many copycats on the market, we went directly to the man himself. He provided a Tabata-approved, research-backed workout plan meant to get you jacked and leave you gasping in four minutes flat.

In 1996, Dr. Tabata and his research team at the National Institute of Fitness and Sports in Japan undertook a study with a simple premise: after a 10-minute warm-up, subjects performed eight rounds of 20 seconds of work on a mechanically braked cycle, each followed by 10 seconds of rest.

To get the most out of your Tabata workout, follow these guidelines:

1. Warm up for at least 10 minutes. That’s part of the original protocol.

2.  Use full-body exercises that engage as many muscle groups as possible.

3.  Exercises using bodyweight, a weighted vest, or free weights are all acceptable.

4.  Go full-tilt during the 20-second bursts. Seriously, don’t slow down.

5.  Try hard to find your breath during the 10-second rests. Good luck.

The total exercise time after the warm-up was 4 minutes. That’s it. There’s a caveat, however: the 20-second bursts were all-out effort at a mind-boggling 170 percent of VO2 max, which is the highest amount of oxygen the body can consume and use for energy.

This short-term explosion of energy produced some incredible results both in the short- and long-term. Just one four-minute session burned the same number of calories as a 60-minute jog. But when performed four times per week for six weeks (with a single day of long-duration cardio added in), it was also more effective at improving the body’s aerobic and anaerobic capacity, compared to regular moderate-intensity aerobic exercise.

In 1997, Dr. Tabata concluded that 30-second bursts at 200 percent of VO2 max with 2-minute rests was not as effective as the 20-10 protocol at taxing the aerobic and anaerobic systems, even though the 30-second, 2-minute protocol had longer and more intense bursts of exercise. The 20-10 model has borne his name ever since.

Despite what you may have heard, the two studies did not deal with fat loss, body composition, or the much-discussed “afterburn” effect. But Dr. Tabata says he’ll soon produce a paper on the improved effects of excess post-exercise oxygen consumption (EPOC) following the Tabata protocol, which will be the first scientific study showing clinical results that the 20-10 protocol can burn calories for up to 12 hours after the workout.

Even though the original study was conducted on Olympic speed skaters, Tabata says he has seen encouraging results implementing the Tabata protocol with subjects dealing with illnesses such as diabetes, ischemic heart disease, and stroke. “You don’t have to be an elite athlete for this [protocol] to help improve your life,” Tabata says.

Just to be clear, a Tabata workout isn’t supposed to be a walk in the park. Dr. Tabata is concerned that people aren’t using the Tabata protocol correctly, because their 20-second bursts are often too mellow to elicit increased EPOC and improved aerobic and anaerobic fitness. If this is the case for you, it could be because your movements are too complicated, or you do movements like planks or bodyweight squats, which are hard to push to maximal intensity.

To get the authentic Tabata experience—and results—you could start by going back to the original template. Hop on a spin bike similar to what was used in the studies from the late 1990s, warm up for 10 minutes, and then crank it during each 20-second interval. If you can stomach it and your cycle offers it, increase the resistance.

If you’d like to branch out from the bike, try this bodyweight Tabata workout consisting of eight exercises which received the stamp of approval from Dr. Tabata. Perform each exercise with the highest intensity possible during the 20-second bursts, and try to recover during the 10-second rest periods. Repeat once through, totaling four minutes.

Perform each exercise with the highest intensity possible during the 20-second bursts, and try to recover during the 10-second rest periods. Repeat once through, totaling four minutes.

Starting on all fours, crawl as fast as possible forward for four paces. Stop, get up, and jump in the air. Turn around, get back on all fours, and repeat.

Start in a lunge position with your arms in a circle. Swing your arms around to one side, then jump the lunge on to the other leg, swinging the arms in the opposite direction. Use the arm swing to provide momentum.

Sprawl out to the side, putting both hands and one foot on the ground. Bring your top leg toward your chest. Push off with the hands and get up into a standing position, then jump. Repeat on other side.

Lunge to one side, holding a light weight (2.5-5 lbs.) with both hands. Swing the weight up from the floor to above your opposite shoulder. Repeat, alternating sides.

Drop into a squat, then jump in the air with the knees tucked up. Repeat quickly.

Start in the push-up position. Jump in with one leg, and then jump up, bringing the opposite knee toward the chest. Repeat on the other side. If this is too difficult, perform the burpees with both legs.

Start in a push-up position. Shift your body weight toward the right arm, and then kick to the left with the right leg. Alternate the movement on your left and right sides quickly.

For a less-advanced version, keep both hands on the ground and alternate knees to the chest rapidly, similar to a mountain climber.

Start in a deep squat and lean back into a crab-walk position. Take a small weight (2.5-5 lbs.) in one hand, using the other to balance on the floor. Swing the weight back over your head, adopting the crab position. Alternate sides and repeat quickly. 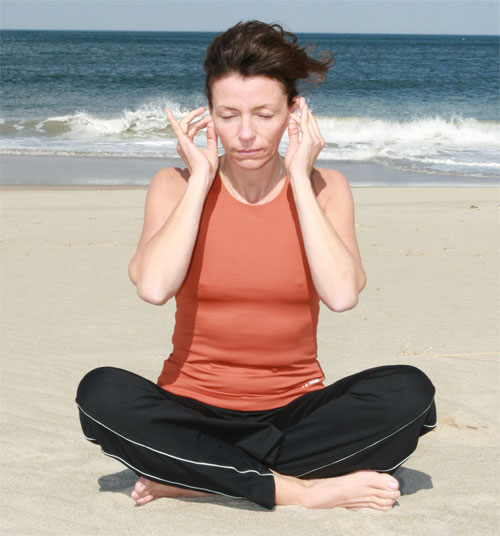