How to get rid of phlegm, has been a question that most of the people who have a stuffy nose ask. Different colours of phlegm indicate different things. In case you still haven’t found an answer to your recurring thought, here are some of our most efficient ways to treat them right.

Phlegm or as it is also popularly known as mucus is a gooey texture produced in the lungs and in the lower respiratory tract. However, there is a slight difference between phlegm and mucus. The term phlegm is used to refer to the excess mucus that is produced by the respiratory system. Sputum, on the other hand, is a mix of saliva and mucus that is usually coughed up from the respiratory tract. It arises out of an infection or any other disease. 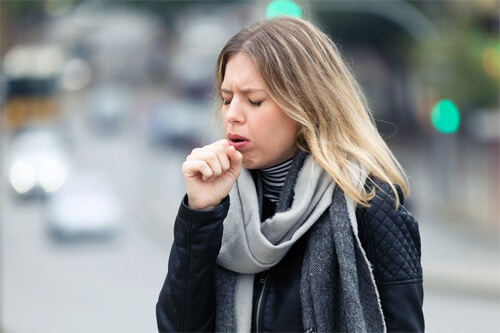 What Are The Different Kinds Of Phlegms?

Surprisingly, phlegm also comes in a range of colours. Each of these colour has a bearing on your health condition.

This is a healthy mucus colour. Clear is the normal colour.

b. Light yellow or green:

This colour comes out of enzymes in white blood cells. Light yellow mucus or green mucus is an indication that your body is fighting an infection.

This is a clear sign that an infection is starting to form in your body and is typically associated with the congestion you feel sometimes. The white colour is the result of increased white blood cells. You need to watch out if you have asthma. The symptoms are different and are more serious, along with the white mucus.

Green or dark yellow mucus is the by product of fever, cough and regular sneezing. It also signals the worsening health condition of your body. An appointment with your doctor is a must, especially if you have asthma and your inhaler does not seem effective.

Brown mucus is basically the result of dried blood, some dirt and all the residue of smoking.

Black coloured sputum or mucus is caused by heavy smoking. Air pollution can also cause black mucus and you will see dirt and dust particles in it.

Pink mucus or red mucus is the result of irritation and dryness of the nasal tissue. Those suffering from asthma can bring out cough with blood in them.

Home remedies for phlegm will sure come in handy. For all those times you feel irritated and you are unable to sleep, these remedies on how to loosen mucus in the chest will be extremely useful.

There is no better magic to get rid of phlegm congestion that inhaling steam. Cover your head over a hot pot of water. Make sure the steam flows directly to your face/nose. Add some essential oils or vicks for added effect.

Drinking plenty of fluids can help cure the congestion a little. In order to keep the mucus thin, your body has to be hydrated well. To achieve this, drink a lot of water and other fruit juices that are not cold. (1)

keeping the air moist around you will help because dryness can irritate the nose and throat. Mucus then forms and acts as a lubricant in such dry conditions.

Sleep on a few pillows and make sure the head is not in the same position as that of the body. When you lie flat, it will cause discomfort to the body, making you believe as though the mucus is collecting on the back of your head.

Nasal spray or saline spray will help clear the mucus and the allergens from the nose. Sterile sprays contain sodium chloride are helpful to get rid of phlegm.

you can also try gargling with hot water to soothe your irritated throat. This will clear out the mucus. Simply add a teaspoon of salt to lukewarm water. Gargle an entire glass of water.

Another significant contributor to phlegm is smoking, especially second-hand smoking, it can cause the body to produce mucus. To get rid of phlegm better keep away from smoking.

Keeping away from caffeine is also a good way to stop the body from producing mucus.

Eucalyptus oil can also be added to your tub of steam inhaling water. The oil is very effective in decongestion and can provide you with good relief for a long time. You can also apply them directly on to your chest. This will helps to get rid of phlegm fast.

when you inhale via the damp cloth, you essentially add a lot of moisture to the nose and throat. This is a favourable situation for loosening mucus and thus providing relief.

Most often, causes of extra mucus or a lot. Take a look below.

Extra mucus is most often not dangerous. However, it can be a real nuisance and makes you uncomfortable too. They sometimes block sinuses and cause fits. In such cases, thickened mucus production may bring about the following symptoms like runny nose, sore throat, nasal congestion and sinus headache. Some of the reasons for the production of excess mucus include;

Sometimes, even smaller things like the frequent blowing of the nose, breathing dry air can lead to spotting blood in the mucus. This blood-tinged mucus is brown in colour, a symptom that is the result of an upper respiratory infection. When the inside of the nose becomes irritated and dry, also results in blood tinged mucus. These are the reasons what causes blood in the mucus.

When Should You Consult A Doctor?

Causes of excessive phlegm is not and should not worry you. Most often, they will get cured on their own. Very rarely do they signal something serious. If the condition persists, you may want to consult a doctor, despite the home remedies and other medications.

1. What is the colour of bronchitis mucus?

White mucus is often coughed up with viral bronchitis. Slowly, this changes from white to green mucus, or sometimes to yellow. However, this is not an indication of a bacterial infection.

2. What does grey phlegm indicate?

Grey phlegm indicates a purulent nasal discharge. This, however, is not a sign of bacterial infection as it commonly believed. Sinus congestion can also trigger grey phlegm.

3. What is the acid reflux phlegm colour?

Acid refluxing can come back to the esophagus and then into the larynx. This causes some damage and will result in thick phlegm to cough up. The reflux also results in voice change and a serious cough.

Disclaimer: While home remedies are almost always safe, they are not the sole medications that you may want to rely on. Talk to your doctor if you think the problem persists longer than expected and if you experience any unusual symptoms.