The cerebrospinal fluid (CSF) is tested through inserting a needle into the spinal canal. If this is not treated quickly enough, it can further give rise to various more complications. It can lead to long term complications like permanent deafness, epilepsy, deficit in cognitive fields and hydrocephalus. 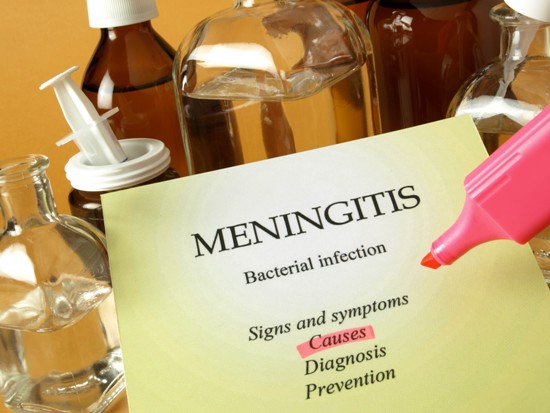 Meningitis is of Two Kinds:

♦ Viral :-  This infection is fairly common and does not have many serious consequences. It only creates long term fever and seizures.

♦ Bacterial :- This is uncommon and extremely serious. If left untreated, it can lead to brain damage and death.

Meningitis is very contagious. It can spread through sneezing and coughing. The germ can be passed through close contact.

Causes And Symptoms Of Meningitis:

This article will explain what are the basic causes and symptoms of meningitis.

There are various symptoms of meningitis. It differs from one age group to the other. Below we given 10 main symptoms.

The most common symptom is an extremely stiff neck. It is excruciatingly painful for the person suffering to touch his chest using his chin. This stiffness can be accompanied by severe body ache and an unbearable headache.

High body temperature can also turn out to be one of the meningitis symptoms. Fever is mainly caused because when the meningitis infection invades the body, the immune system immediately reacts by raising the body temperature. the onset of high fever is particularly common during bacterial meningitis, a dangerous form of meningitis that requires medical treatment. Fever during meningitis is most of the time mistaken as one of symptoms of common flu or illness.

Headache, fever and stiff neck are the three most common warning signs of meningitis. However, according to the recent findings, typically 44-66% of cases with meningitis infection, report these three symptoms. In most cases, like in bacterial meningitis, the patient only shows only one or two of these three symptoms. This makes identification of the disease difficult, causing a delay in the start of treatment. Bacterial meningitis is however life-threatening and therefore it becomes important to identify as early as possible.

Along with high fever, if the person’s case of meningitis is serious, then he or she can experience seizures. These seizures can be similar to the ones which occur when you suffer from epilepsy. They occur from extreme pressure areas in the brain tissues and inflammation of brain tissues. Focal seizures can also occur.

If the person displays positive symptoms for this sign; which is a person lying down supine with his hips and knees flexed at 90 degrees, then it is a clear sign of meningitis because this symptom is rarely found in other diseases.

Appearance of rash all over body is also one of main symptoms of meningitis. Skin rashes is very common in meningococcal meningitis, especially in babies and toddlers. The appearances of rashes is caused to bacterial infection in the bloodstream. When the bacteria multiples in the blood, it releases toxins that damages the blood vessels. This ultimately leads to appearance of rash all over the body. Rash causes due to meningitis infection can easily be tested at home with the help of the Glass Tumbler Test.

During meningitis infection, swelling occurs in the brain that causes confusion, memory loss, lack of focus, insomnia, dizziness, lethargy and even difficulty in waking up. If you feel more confused most of the times, and also face any of the above mentioned symptoms of meningitis, it is crucial to see your doctor first. This is because, in extreme cases of meningitis like bacterial meningitis the situation can worsen quickly and may lead to permanent damage.

Confusion depicts the puzzled state of mind wherein the person finds it difficult to differentiate between dream and reality. In some cases, it even results in acute memory loss and the patient tends to forget even important milestones in their life like marriage or children. This state can last for quite some time and even leads to embarrassment or frustration. Persistent and strong support during this time can help in emotional healing.

In the early developmental stages of meningitis, nausea or vomiting is quite common. With the ongoing development, the conditions might get severe, interfering with the digestive functions. The patient may experience loss of appetite, resulting in unintentional weight loss. In such a state the body gets deprived of important nutrients, vitamins and minerals and also affects the immune system.

Additional complications can occur in the early stages of the illness. There are high chances of sepsis being triggered. Excessive blood clotting may obstruct blood flow completely and is an extremely serious point and should be kept with a close eye on. Incase your disease is meningococcal, and then the chances of gangrene increases. Hemorrhaging of the adrenal glands can often be fatal.

Other complications include swelling of the brain tissue with the pressure created inside the skull increasing. This can lead to the brain herniating through the skull, causing symptoms like losing consciousness and abnormal posturing.

It is typically caused by an infection due to microorganisms like bacteria, virus, fungi and protozoa. Each show a complex set of different symptoms and differs accordingly for each age group.

Meningitis can also occur due to other reasons and is known as aseptic meningitis. It can happen as a side effect of a treatment or certain drugs. Tissue disorders (connective tissues), cysts can also cause similar inflamed conditions.

Viral Meningitis is the most common form of meningitis infection caused by different viruses, like mosquito-borne viruses. This kind of meningitis can easily be cured and there is no specific form of treatment. During viral meningitis the illness and other symptoms get resolved in a week’s time, without causing any complications.

A specific type of streptococci bacteria, known as Group B streptococci resides in the vagina and is the main cause of meningitis infection in newborns and premature babies, in the first week of their very existence. Furthermore, Escherichia coli, a bacterium that resides in the digestive tract can even cause meningitis in new born babies. Also during epidemic conditions, newborns cal also get affected by meningitis caused due to Listeria monocytogenes infection.

4. Bacterial Meningitis in children below the age of 5 years :

Children under the age bracket of 5 years and who have not received proper vaccinations are likely to be infected with meningitis caused due to Haemophilus influenza type B bacterium.

5. Bacterial Meningitis in children over 5 years :

Meningitis in older children due to bacterial growth is also quite common and is caused deu to Streptococcus pneumoniae and Neisseria meningitidis infection.

In adults more than 80% of meningitis cases are caused due to infection by S. Pneumoniae and N. Meningitidis. In adults who have crossed the age of 50, meningitis is mainly caused by bacterium L. Monocytogenes.

People who have suffered some form of trauma that has resulted in skull damage are at higher risks of suffering meningitis. In such cases, the bacterial pathogens enter the meningeal space through the nasal cavity. Also patients who have undergone major surgery and had to implant cerebral shunt or other such device are more likely to suffer with meningitis. Bacteria such as pseudomonas and staphylococci causes meningitis by infecting through the medium if such devices.

9. Bacterial Meningitis And Infections In Ear:

Although uncommon, medical cases like mastoiditis or otitis media, along with some form of infection in head or neck can also lead to meningitis. It is found that people with cochlear implant are more likely to get pneumococcal meningitis. According to some recent findings , children with hearing loss have 5 times more chances of developing meningitis as compared to those children with normal hearing.

Use of immuno suppressants, infection due to HIV/AIDS and weakened immune system as a result of aging are some of the risk factors associated with Fungal Meningitis. This form of meningitis does not affect people whose immune system functions normally. During fungal meningitis, the patient normally experiences headache and fever for few weeks of infection. The most common meningitis caused by Cryptococcous neoformans fungi is referred as Cryptococcal Meningitis. Some of the other fungal pathogens that cause meningitis are Histoplasma capsulatum, Candida species, Coccidioides immitis and Blastomyces dermatitidis.

Meningitis is also caused by parasitic infection. It occurs when there is abundance of eosinophils (a kind of white blood cells). Some of the common meningitis causing parasitic pathogens are Gnathostoma spinigerum, Angiostrongylus cantonensis and Schistosoma.

It is potentially life threatening and can lead to death if medical advice is not taken at the right time. The treatment constitutes a wide spectrum of antibiotics and prior to which a confirmatory test is conducted to identify the cause and type. Often people suffering from this disease show very low level of consciousness and have to be administered with mechanical ventilation. Anti convulsants are given if the person is suffering from recurrent seizures. If the infection is bacterial, then steroids might be administered. There might be raised intracranial pressure which much also be diagnosed.