The word sneezing needs no explanation. It is in medic words described as an involuntary release of a gust of air through the mouth as a consequence of some form of irritation in the nasal cavity which is followed by an immense satisfaction. Sneezing however may be a common household term but a lot of people are unaware of the causes why they might get a sudden sneeze or why every time they pass a particular place does their sneeze act up. 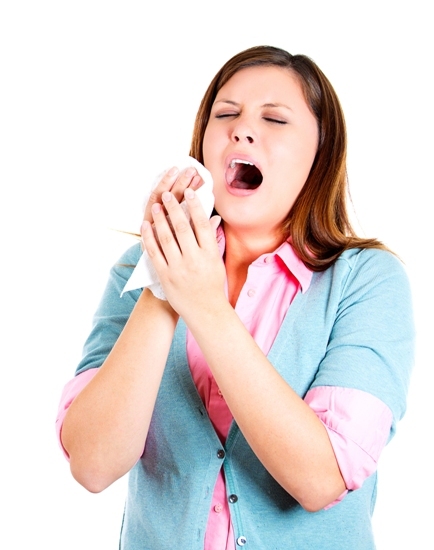 Usually before sneezing one feels a funny sensation on the nasal cavity, almost same as a soft stinging feeling but this is one of those involuntary actions from our body like heart beats, eyelid fluttering etc. a sneeze just cannot be stopped which is in one way a good thing since it is the body’s way of judging which particle is good and which particle is foreign and harmful. When these foreign particles enter our body, the miniature hairs in our nose stop them from rushing up the nasal cavity while the brain helps us push these foreign items out of our body through the nose.

Here are some of the causes why a person sneezes. You have to take care about these things and avoid also to safe from Sneeze.

While walking down the road, a gust of steam from the bus beside veils you, the next moment you walk past a construction house which is then mixing sand and cement causing the air to be filled with mica particles. Someone hurries past you and on the process you feel a gust of tobacco smell hit your nose. On the bus down to work the woman beside you who is suffering from cold sneezes loudly. Where do you think all this pollutants take shelter? However our nose has small hair like structures called cilia that catches and filters most of this air we breathe in and as the fresh air goes up, the pollutants remain behind. When it is time to get rid of them, the brain triggers the sneeze button and we rid it of our body.

It is not always pollutants that causes you to sneeze but any sort of particle that is incompatible with your body but of may not be a problem for your friend. For example if you have an incompatibility with fur, wearing fur items or being in contact or in the near vicinity of them might react up your allergies and since your body is not favoring the element it will cause an episode of sneezes whenever it is around.

At times it may be because you are about to come down with cold and fever. Right before the fever hits you one might feel the sneezes predominating which announces the arrival of cold. This then follows into a red running nose and chicken soup in bed. This is why it is never a good idea to prolong a sneezing episode for long. Treat it before it becomes serious.

A lot many might may be unaware of the fact that your perfume can make you have a fit of sneezes too. Usually we wear a perfume on the nearest places to the nose, maybe at the crook of the neck, underarms and shoulder, behind the ears etc. if the scent is too strong for your body to favor, it might act as a barrier between it entering your body. This is why at times too strong a scent solution might be the cause of your sneeze.

A sneeze is a normal thing and should stop within a minutes time but if this effect prolongs for days with you having often episodes of sneezes, try consulting a doctor since sneeze might also indicate the presence of something wrong in your nasal cavity maybe an infection or sore in the internals which is causing the sneeze. However this should follow a little stinging irritation feeling while you sneeze.

This is usually the scenario when a sudden fit of cold air hits your nose. Suppose you are leaving the building and you get hit by a gust of cool air. This causes the membranes in your nose to contract fast triggering a sneeze.

Often exposure to a bright candescent light all of a sudden might cause you to sneeze. This condition is called a “photic sneezer” which is deeply rare. Once you are exposed to light your eyes sensitive to bright light starts acting up your eye nerves. You squint. But when the surrounding nerves such as the nasal ones act up too you start sneezing.

It is not only perfumes one should be careful of. There are often trigger elements like alcohol smell, or a certain type of smell one might be allergic to. Generally these traits are submissive unless the actual scenario is placed and the allergy called smell allergy works up. For some it may even be aroma smells or cosmetic smells that might act up a sneeze.

It is quite common for someone to get allergies from animal hair especially from that of a cat. Be sure you don’t fall in that categories and if you do look forward to giving your cat a better home where she doesn’t have to be the source of an allergy reaction.

Looking for causes of sneezing. This particular cause is different from the all the sneezing causes discussed above. If a person resides in an unhygienic environment, then bad smells are pretty common. It means that one will easily be a victim of progressive sneezing as some persons cannot withstand a bad odor and it acts as an allergy for the breathing membranes.

There are many symptoms of sneezing among which the best ones are discussed below.

1. Burning Feeling in the Throat :

Among all the symptoms of sneezing this one is pretty common. A lot of people have experienced a burning throat or a specific kind of inflammation in the throat which has led to other throat issues as well. Many symptoms such as soar throat are common during the phase of sneezing.

Blocked nose? Breathing problems? These are all symptoms of sneezing. If you are sneezing almost throughout the day then it is pretty common that you will have problems breathing and a blocked nose or a nose congestion issue can come up pretty easily. One of the best ways to avoid nose congestion is to take the help of home remedies such as breathing the steam turmeric powder and other similar spices in warm water.

One of the most sighted sneezing symptoms is a sore throat. One will experience a sore throat if he or she is suffering from sneezing issues. Throat problems are a common issued during sneezing.

A slight fever can take place while you’re suffering from sneezing. Many people have experienced a slight rise in the body temperature when they have been attacked or infected with harmful germs which have caused the sneezing.

Along with watery eyes, the burning sensation in the eyes is also pretty common. People experience it pretty often and this can hamper the vision as well (temporarily).

With the throat issues come the problem of cough. Cough is deposited which in turn is responsible for all kinds of breathing problems. One will suffer heavily from cough issues if he or she already has weak lungs and other breathing problems.

if your nose is running throughout the day and there is no specific reason behind his problem, then is is possible that you might be suffering from sneezing. It is really easy to figure out by the help of this symptom. A running nose is a common issue during sneezing infection and people of all ages will experience it.

Fatigue is one of the most common and mostly happening symptoms of sneezing. It occurs due to high volume of tension on the nervous system to which it is not habituated to. People who have a weak nerve function throughout the body will have tons of issues with this particular symptom. They might experience some other additional symptoms with this as well.

Among all the sneezing symptoms, this one is commonly seen in children. One’s eyes will become watery if they are facing some nasal difficulties and are going through the phase of sneezing.

Random chills are some of the most common sneezing symptoms. A person will experience a cold feeling when he or she is suffering from sneezing problems. This symptom has been sighted in a lot of people. There are many therapies and remedies which can be exercised at home. If medication is required, then one should not hesitate to take it as the chilly feeling can take a really bad direction if not cured at the right time.