We are talking here today about yet another very popular mudra known as Surabhi mudra. This mudra is also known as Kamadhenu mudra or wish-fulfilling mudra. Now you might be wondering what is meant by Kkamadhenu mudra? Kamadhenu is the name of an Indian God who has the power of fulfilling her practitioner’s wishes. 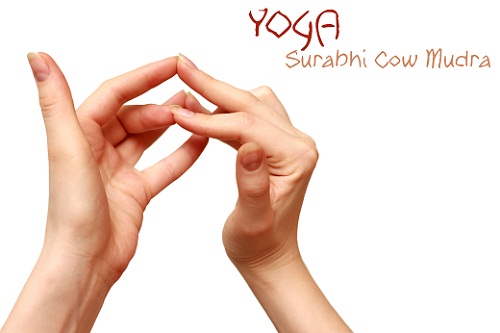 Kamadhenu is a Sanskrit word which means mother of cows. Cows have a deep significance in Indian tradition and thus kamadhenu also is very important in our tradition. It is believed that goddess kamadhenu has got miraculous power and she can fulfil every wish we ask for. So, most of the people come to this goddess with their desires and ultimately travel to the path of spiritualism. It is believed that you will achieve the utmost level of happiness.

How To Perform Surabhi Mudra:

Now, a major question arises as to how to perform this Surabhi mudra

1. Sit in a comfortable of half lotus position. You can either sit on a light mat or any regular carpet. Many experts have strongly advised not to sit directly on the floor. This is because it is believed that there are some radiations from the floor which will not be good while practising any form of yoga or mudra.

You can sit with your eyes closed and open completely your choice, but closed eyes can help concentrate better.

2. Make sure that the tip of right-hand little finger touches the tip of the left-hand ring finger.

3. Now, the tip of the left-hand little finger must touch the tip of the right-hand ring finger. You must note that the third step is just the opposite of the second one.

6. Make sure that both the thumbs are extended.

The steps might sound a bit confusing but it is actually to do and practise. And the immense benefits of this mudra makes it a favourite choice always.

Precaution And Tips Of Surabhi Mudra:

This is an extremely powerful mudra which is known to strike a balance between all the five elements of the earth. Thus, you must be an effective practitioner of this mudra. If you find the mudra a bit difficult in doing initially then don’t force yourself or rush into anything. Just begin with 1-2 minutes and then gradually you can do 15 minutes a day. For long-lasting benefits, this mudra should be practised daily for 45 minutes or thrice a day with 15 minutes each.