16 Must-Visit Temples in Goa With Images

Goa, the name strikes a chord with many Indian and foreign tourists alike. This place is synonymous to beautiful beaches, scenic surroundings and churches. Not many know that Goa is home to some of India’s finest temples popular for their history, art and architecture. A temple in Goa is called a Sansthan. Before the Portugese invaded the state, these temples were hubs for social and cultural activities. The Mahajan is were responsible for maintenance of these temples. However, after invasion, some of these ancient temples were completely demolished by the Portugese and the main diety idols were moved to safer places. The only one ancient temple that has withstood the tests of time is Mahadev Tambdi Surla. This article focuses on some of the most prominent list of temples in Goa, which every Hindu must add in their itinerary.

Here are The List of Most Famous Temples in Goa To Visit. 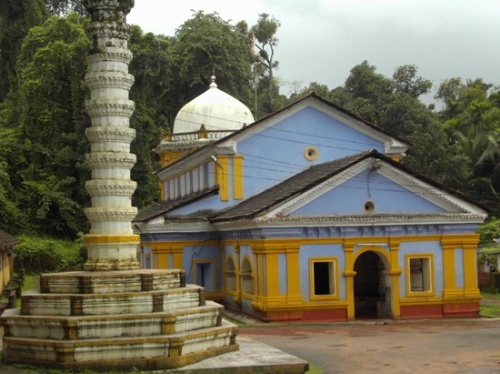 The Shri Saptakoteshwar temple in Narve is 35 kms away from Panji. In the Konkan area, it is considered to be one of the sixth great sites of Lord Shiva temples. The main presiding deity is Saptakoteshwar, a form of Shiva and other deities include a shrine of Kalbhairav and the padukas of Dattatraya carved on the stone. 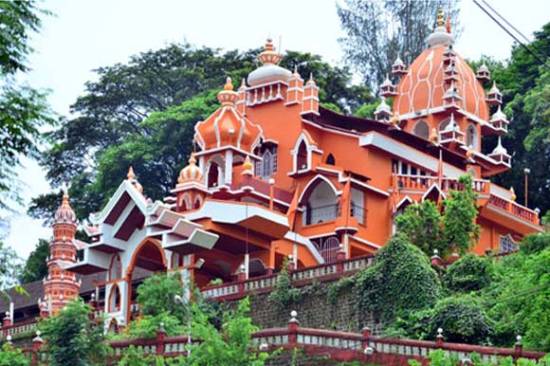 Maruti temple in Panaji, New Goa is located on top of the Altinho hillock overlooking the Fontainhas district. The temple is dedicated to Lord Hanumana, the monkey God and enshrines Lord Hanumana as the presiding deity. The Fontainhas of Phoenix spring is situated near the Maruti temple from which it derives its name. The spring has three tanks. The temple is brilliantly lit at night and thus it is visible even from a distance. 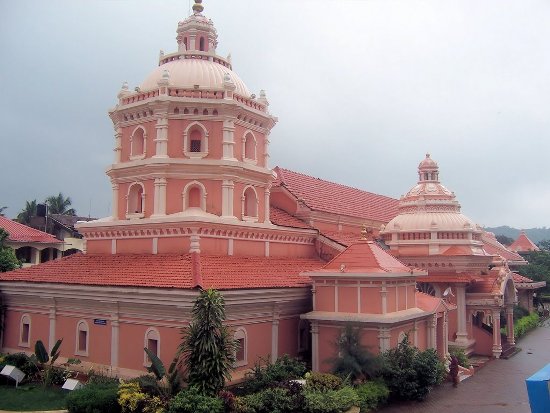 Shri Mahalakshmi temple in Bandivade, 22 kms from Panaji is dedicated to the Goddess of wealth, Mahalakshmi. The temple came into existence in the year 1413. There are two idols of Mahalakshmi in the temple along with idols of other deities such as Shri Ravinath, Shri Baleshwar, Shri Narayan Purush and idols of two devotees named Safto and Fato. The main idol is taken out on a chariot during the festival of Maha Shivaratri and the second idol is taken around in a palanquin on the auspicious day of Ramnavami. 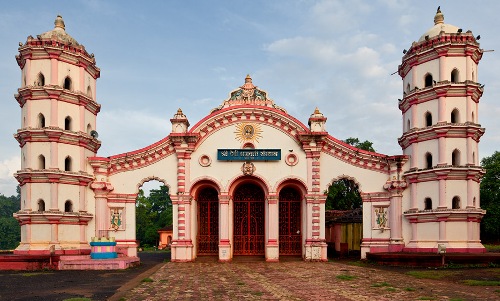 There are many Bhagavathi temples located in the state of Goa, namely in the places such as Pernem, Khandola, Marcela and Parse. The presiding deity of the temple is worshipped here in the form of Mahishasur Mardini, a form of Shakti, by Goud Saraswat Brahmin, Daivadnya Brahmin and Bhandari communities. In most of the Goan temples, Bhagavathi is worshipped as one of the Panchayatana deity. 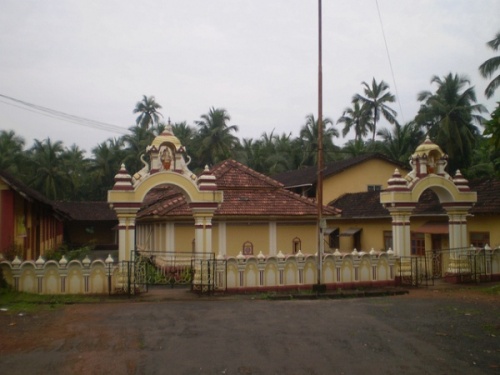 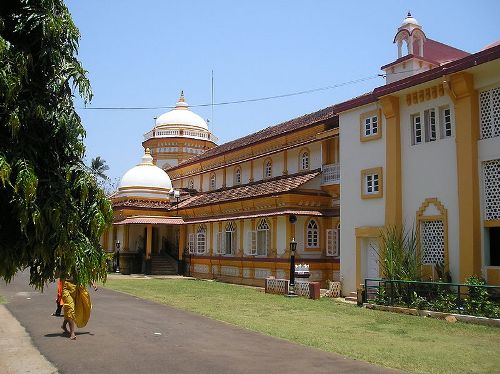 Ramnathi temple is situated in Ramnathim in Bandivade area of Goa. Since this temple belongs to Saraswat Brahmins, it falls under the category of Goan Brahmin temples. Thus it involves the system of Panchayasthan which means the temple has 5 deities which are Shri Ramanath who is also the main deity of the temple,Shanteri, Kamakshi, Laxmi Narayan, Ganapati, Betal and Kalbhairav. The temple also houses other family purushas. 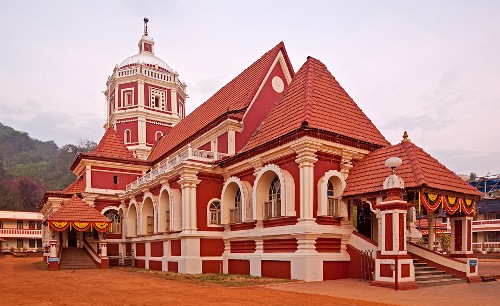 The large temple complex of Shri Shanta Temple is located near Panaji, at the foothill of Kavalem village in Ponda Taluka region. In 1738, a simple laterite mud shrine was built in the place which was later renovated into a beautiful hindu temples in goa 1966. This is a private temple dedicated to Goddess Shanta Durga who medidates between Shiva and Vishnu. The temple is a fusion of Indo-Portuguese architecture. 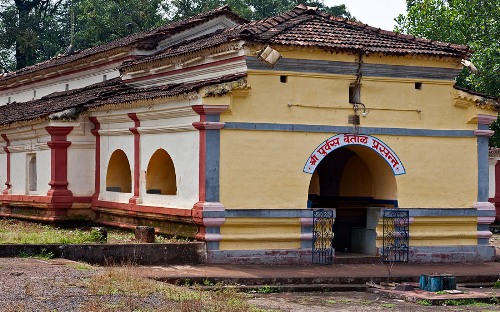 Shri Betal temple is located in Amona village in Bicholim Taluka area. The temple is dedicated to Shree Betal worshipped in the form of Worrier Shiva who is also the presiding deity. The temple also houses Shiva Pindi and its foot soldiers. The deity of the temple is considered to be the patron deity of Goud Saraswat Brahmin community which is spread all over India. 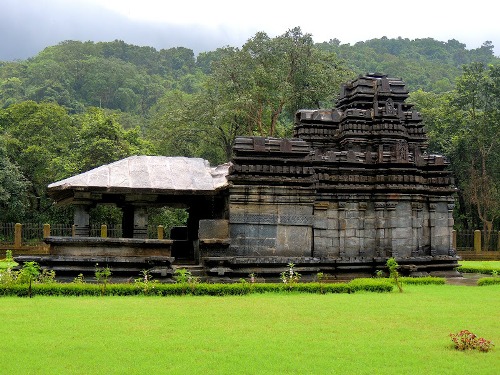 Mahadev temple located in Tambdi Surla is the oldest temples in south Goa which is a 12th century Shaivite temple dedicated to Lord Mahadeva, another name of Lord Shiva. The temple remains an active place of worship for the Hindus till date. The temple houses a Shiva lingam and consists of garbagriha, antarala and a pillared Nandi mandapa. The temple also has idols of Lord Vishnu and Lord Brahma with their consorts. The centre of the temple also houses a headless Nandi bull. Maha Shiva Ratri is widely celebrated here. This is the most famous temple in Goa. 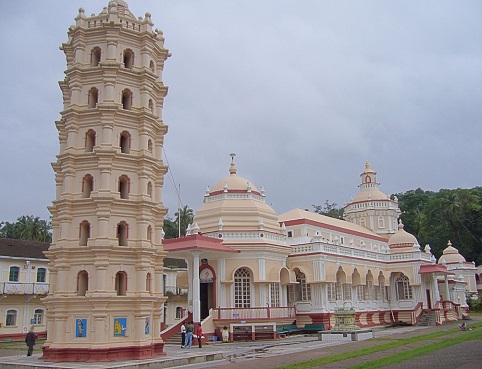 Mangeshi temple is one of the most popular and most visited temples in Goa. It is located at a distance of 21 km from Panaji, the capital of Goa. It is important to adhere to the dress code rules before visiting this temple. It is dedicated to Lord Manguesh or Lord Shiva temple. This temple was originally located in Cortalim village and was moved to this location in 1890 during the reign of Marathas. It was one of the most beautiful temples in which a large number of Pujas are performed everyday. 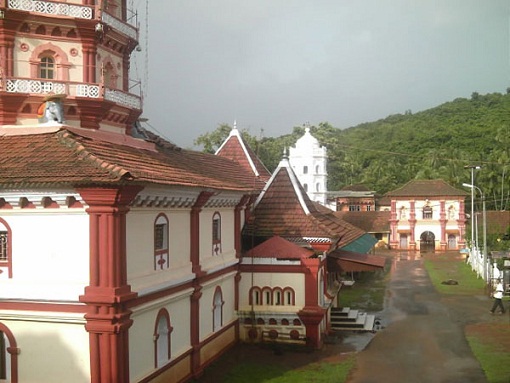 This temple is holy abode of Goddess Kamakshi, who is the form of Goddess Parvati. This impressive structure is located in Shiroda and the original temple was in Raia, which was completely ruined by the Poturgese invasions. The ferocious form of the Goddess called MahishasuraMardini is worshipped in this temple. The roof of the temple resembles a Buddhist Pagoda with hooded serpents protruding from the corners of the roof. This is another most visited temples in Goa. 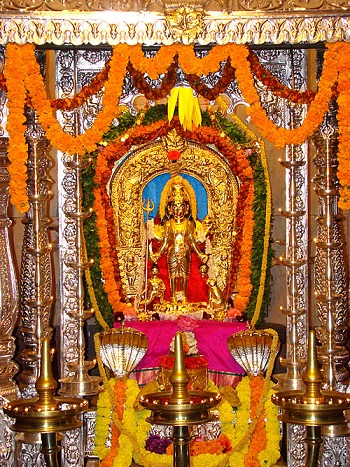 Mahalasa Narayani Temple is the abode of Goddess Mahalasa and is located in Mardol. Mahalasa is the female avtar of Lord Vishnu and takes the form of Mohini. She has four arms, each carrying a sword, a head , a trishul and a bowl. The unique feature of this temple is that she wears a sacred thread around her waist, which is usually found only on male dieties. The original temple was destroyed by the Portugese in 1567 and was reconstructed in the 17th century. 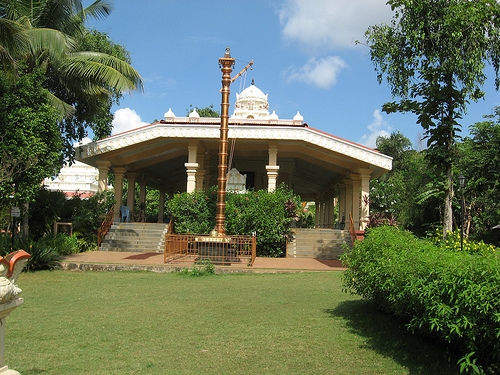 This temple is dedicated to Lord Balaji and is located in Cuncoleim Village in Ponda. The temple has been made a part of the Kanchikamakoti Peetam and has been blessed by his Holiness Swami Jagadguru Sankaracharya. The idols of Lord Balaji and Padmavathi were given by the TTD trust of Tirupati. Balaji temple in Goa is one of the most serene and beautiful places to visit. It is visited by devotees for peace and tranquility. 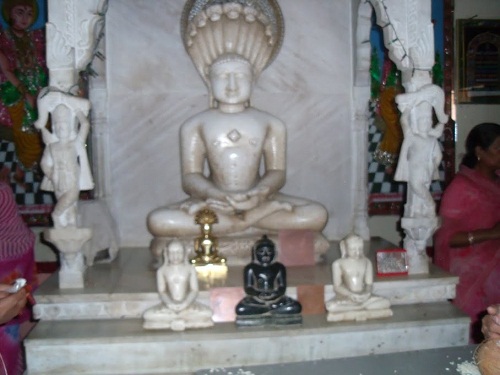 This temple is called Shri 1008. Adinath Digambar Jain temple and is the only Jain temple in Goa. It is situated in Margao and has taken 15 months to complete the construction of temple. The temple has a Digambar avtar of Adinath in white stone. This temple is popular among Jains and is a must visit temple in their list. Jain temple is an abode of peace and harmony. One can maintain peace and tranquility in this temple. 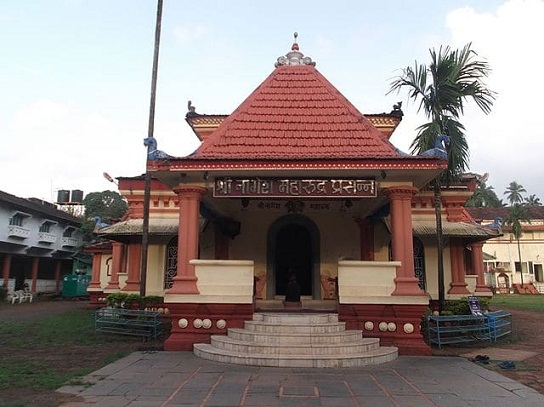 Nagesh temple is the holy abode of Lord Shiva, who is worshipped as Nagueshi. The unique feature about this temple is that it is located in exactly the same place as it was constructed originally. This was not moved from its location. The temple authorities have recently banned the entry of foreigners into the temple due to their dressing and behavior. There is also a stone inscription in the temple which was done in 1413 AD. 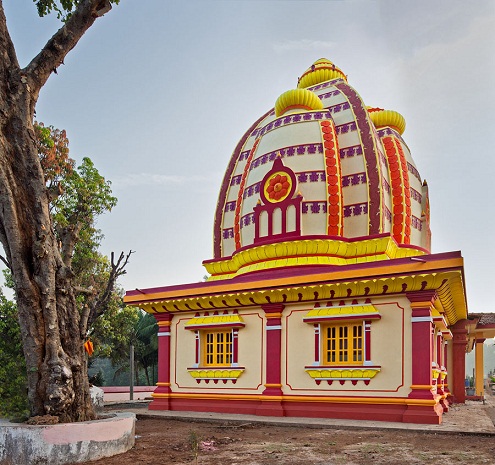 The Brahma temple is one of the unique temples which worship Lord Brahma. It was originally located at Carambolim and was moved to the current location after the Portugese invasion in the 16th century. The surrounding area is called Brahma-Karmali, or home of Brahma. The idol is sculpted in 11th century and is skillfully carved in black stone. The central face of the Brahma idol has a beard and the idol has the figures of Savitri and Saraswathi standing on either sides.

Goa was once a hub of Hindu temples until the Portugese entered this area under the pretext of trade. They completely destroyed Hindu temples due to their religious intolerance and have heavily converted people into Christianity. This is the reason why people find it hard to believe that Goa is home to such beautiful temples. The state has always been synonymous to Christian culture. However these temples listed in the article are embodiment of the rich Hindu culture and tradition that has withstood multiple attempts to displace it from the face of India.