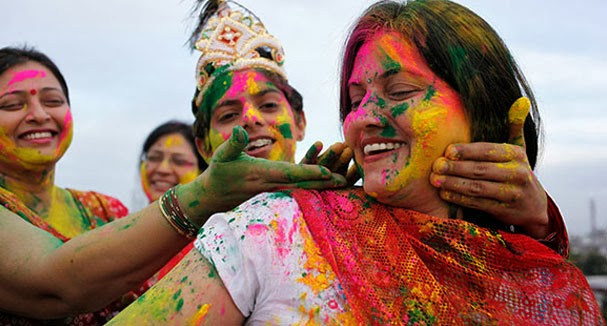 Important Festivals Of Jammu and Kashmir

Jammu and Kashmir is the crown state of India. It is rich in culture and diversity. Although it is known for Islamic culture, Kashmir also has a fair population of Hindus, who celebrate their festivals with much joy and ado. Along with celebrating national festivals like Diwali and Holi, Kashmir has its own local festivals. These are conducted by the local groups and people irrespective of their religious views take part in them. Some of these festivals like the Hemis festival is treated as national holiday to ensure everyone takes part in it. Such is the importance of festivals to bring people together. In this article, we shall explore some of the popular festivals in Kashmir.

The festival of Holi is celebrated with much enthusiasm in the state of Jammu and Kashmir Holi is known as the festival of colours. It is celebrated in the month of March every year and it spans for two days. The first day starts off with fasting and prayers. In the evening, bonfires are lit in celebration of the triumph of good over evil. This also symbolises the end of the harsh winters. The second day commences with people playing with colours and coloured water. 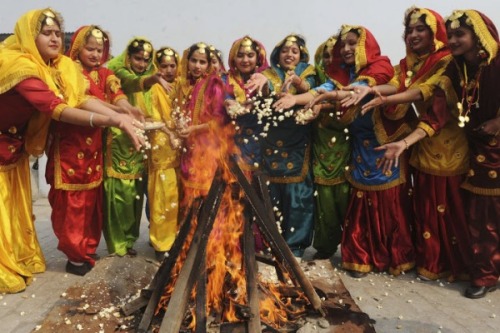 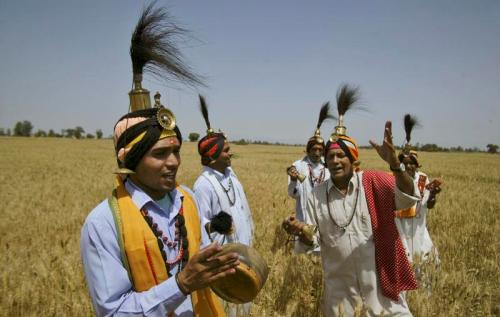 Baisakhi festival is a very important festival celebrated in the state of Jammu and Kashmir. It is held on the 13th day of the month of April. It commemorates the first day of spring or the first “Baisakh” and it celebrates the passing of winter. It marks the New Year for Sikhs. This is mainly a rural festival. This festival celebrates the sowing of new crops. People take dips in the Ganga on this day. There are different village fairs held which introduce and combine Bhangra dancing, wrestling, and archery. This day is auspicious for marriages. 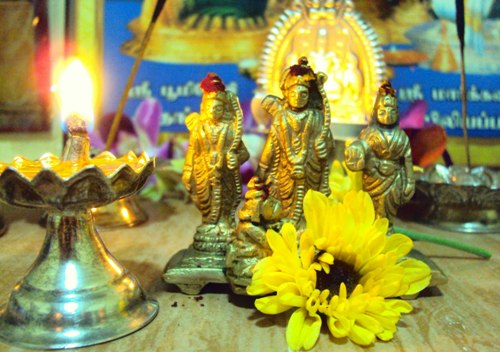 “Sri Rama Navami” marks the birth of Lord Rama,who was the king of Ayodhya and the protagonist of the ancient epic “Ramayana”. He is also called “Kalyanotsavam”. Navami also marks the marriage of Rama and Sita. The festival is celebrated for ten days. Devotees fast and pray at various temples to Lord Rama. The temples are decorated with flowers and Rathyatras are organised across the towns and cities. The religious epic “Ramayana” is all over the state. The people consider this time auspicious and buy new clothes. They decorate their houses with lamps and flowers. “Bhajans” are sung in praise of Lord Rama. 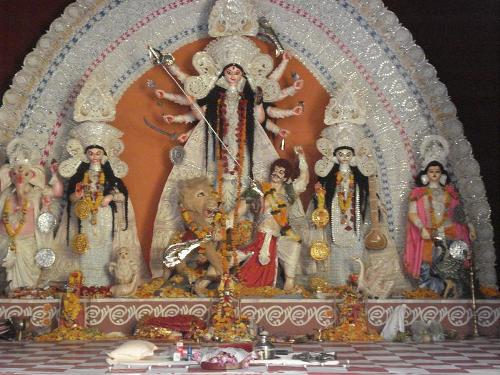 Navratri in hindi means nine nights. It is celebrated in the state of Jammu and Kashmir annually and is known as the festival of nine nights. This festival honours the Mother Goddess or the Divine Shakti or Force of the universe. During this festival, colourful costumes are worn and folk dances are performed. Offerings are made to Durga devi and mauli is worn by little girls. 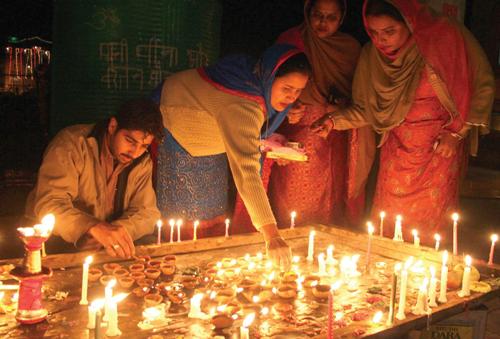 Diwali or Deepavali is known as the Festival of Lights. This festival commemorates the killing of the demon Ravana by the king of Ayodhya, Ram. On returning after his victory, the kind was welcomed with the lighting of crackers and light. In Jammu and Kashmir, this is a major festival celebrated with lamps, crackers and fireworks. It is celebrated on Amavasya or new moon day in this state. 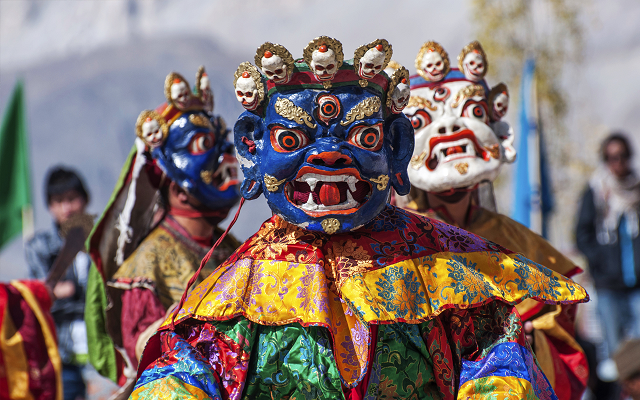 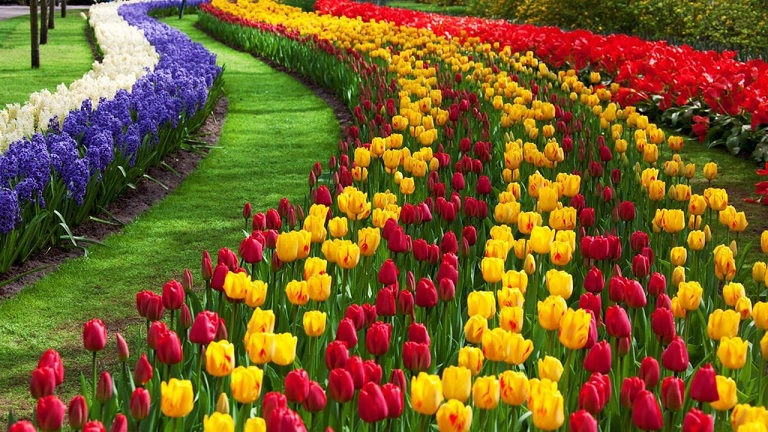 Kashmir has India’s best Tulip gardens. With hundreds of Tulips in full bloom during the spring season, Srinagar, the capital city of Kashmir celebrates the Tulip festival. This is the time when tourism is at its peak after the snowy winters. Tulip festival, one of the most visited Kashmir festivals attract a lot of film makers, who make it a point to shoot many romantic songs, without having to visit foreign locations.

Shikara festival is celebrated on the Dal lake of Srinagar. This festival was started in the year 2020 with an intention to promote tourism. The Shikaras or the boats, are beautifully painted and decorated during this festival. A number of races like the Dragon race, Canoe Polo matches are conducted between the Shikaras. This festival happens during the months of July to August. 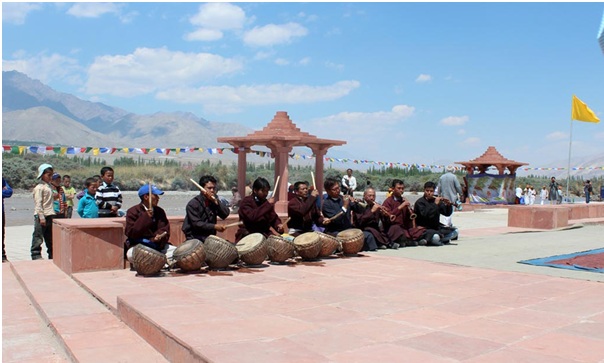 The Sindhu darshan festival is conducted every year on the day of Guru Purnima, a full moon day. It is held at Ladakh district of Jammu and Kashmir. This festival was first conducted in the year 1997 and still holds the same importance. The festival is to honour the river Sindhu and worship her. It is an important festival to all the Hindus of Kashmir and holds a significant religious importance.

Kashmir might be a land of constant conflicts with the neighboring countries. Although known for unrest, this beautiful land never ceases to celebrate the beauty of life. Festivals are a time of joy and togetherness. They unite people together and create a strong bond between them. Kashmir’s local festivals are celebrated with the same intent of uniting the locals together and stand as one community. They also attract a lot of tourism, which can bring in substantial income to the state. Kashmir festivals are symbols of Cultural harmony in the state.

12 Best Honeymoon Places in Thailand to Visit in 2020