When it comes to highly refreshing teas, chamomile tea is the first thing that comes to our mind. One cannot simply forget its sweet aroma and captivating taste. Basically Chamomile is an herb, the flowers of which are used to prepare tea. Chamomile tea helps improve digestion, get rid of sleeping disorders and relieve stomach cramps quite effectively. However, do pregnant women have to think twice before having this beverage? Chamomile tea during pregnancyhas been widely debated in recent years as there have been reports of abortion due to the consumption of chamomile tea. Let us have a look at the benefits and side effects of consuming chamomile tea and then analyze and answer whether it is advisable or avoidable! 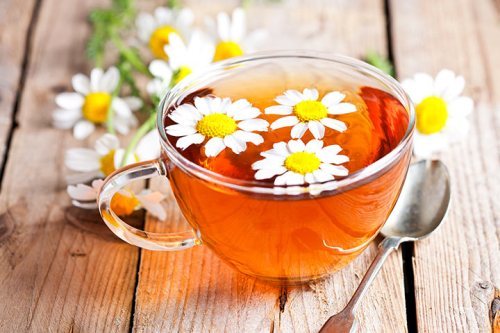 A question that looms over everyone’s mind is- Is it safe to drink chamomile tea at the time of pregnancy? Truth be spoken, it depends completely on the one drinking it. Thanks to its unique taste, chamomile tea can be really tempting beverage to drink. However, if one gives in to the temptation and if you chamomile tea, one cup after another, then it certainly is a cause of serious concern.Any herbal tea when consumed in excess during pregnancy is dangerous, and chamomile tea is no exception. Consumption of herbs in large doses, in this case the many cups of chamomile tea, can cause serious complications in the pregnancy making it a stressful period.

Morning sickness which causes a feeling of nausea in the morning is a common compliant by pregnant women. In such a scenario, consumption of chamomile tea in limited amounts can be extremely effective to alleviate morning sickness. This herbal tea has a pleasant aroma and a nice tantalizing flavor that can relieve your nausea in seconds. Chamomile tea is also used to treat insomnia and restlessness; moreover, it maintains the digestive system, the functioning of the liver and gets rid of joint inflammation and menstrual cramps. As you can see, there are numerous benefits of chamomile tea during pregnancy that you can drink it without any apprehensions and doubts. However, excess of anything is bad; and excess of chamomile tea can lead to serious complications during pregnancy which is not at all desirable.

The uterus (womb) where the development of the baby takes place during the nine months of pregnancy,can be affected by the side effects of chamomile tea if it is taken inappropriately. Chamomile tea transforms into an abortion(A) causing drug, if the intake is too much. Basically, chamomile acts as an abortifacient which contracts the uterus. At the time of delivery, the uterine contractions are normal; but before it may lead to serious consequences like miscarriage.

Apart from miscarriage, frequent intake of chamomile tea can further increase the risk of preterm delivery among pregnant women. There might be symptoms of premature labor, where the uterus will contract in excess of four times an hour. Thus, if you fail to keep a check on the amount of chamomile tea you drink, it might lead to a premature delivery.

How Much Chamomile Should one Drink While Pregnant?

Chamomile tea and pregnancy are not toxic together if taken in small amounts, but in excess chamomile tea acts like a fatal poison for the child. To keep away from all the pregnancy related problems, moderate intake of chamomile tea is recommended. One or two cups a day is the general recommendation for herbal teas, but one cup is recommended per day just to be on the safer side. Half a cup, each in the morning and evening, would be the best way to consume chamomile tea. The herbal quantity should be kept in check, and the tea prepared should not be strong. A concentrated preparation, would kill all the purpose of making this healthy beverage.

Chamomile tea should be prepared at home rather than opting for the commercial brands outside as they may have some herbs as their ingredients which are not recommended during pregnancy.

Pregnant women who want to drink chamomile tea should double check the brand of the tea making sure that the product is high quality.

Remember, excess of chamomile tea acts like a uterine stimulant and thus it should be consumed in small amounts in a sensible manner. One should drink it only when extremely necessary, like in the case of morning sickness to get rid of nausea. Hence, one should be extremely cautious while drinking chamomile tea during pregnancy just to be away from all the stress and unwanted consequences.