Gujarat is a popular tourist destination of India and has beautiful scenic places. The state of Gujarat is also home to numerous temples that are visited by devotees across the world. From Dwaraka, the birth place of Lord Krishna to Somnath temple, one of Jyothirlingas, Gujarat is home to some of India’s iconic temples. It also has some of the prominent Jain temples like Palitana temple. Some of these temples are considered to be world heritage sites know for their history and their association with Indian mythology. Check out this article to explore Gujarat famous temple list that should be visited not just by Hindus but every Indian.

Most Famous Temples In Gujarat: 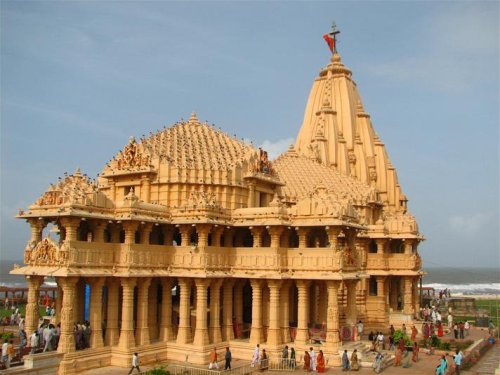 The Somnath temple is the first among the twelve Jyothirlinga shrines of Shiva and is located in Saurashtra on the western coast of Gujarat. Due to the various legends connected to the temple, it is considered to be sacred and thus it is a famous pilgrimage and tourist spot. The temple is known as the ‘Shrine Eternal’. The present building was rebuilt in 1947. The temple is built in Chalukya style and three aartis are performed daily. 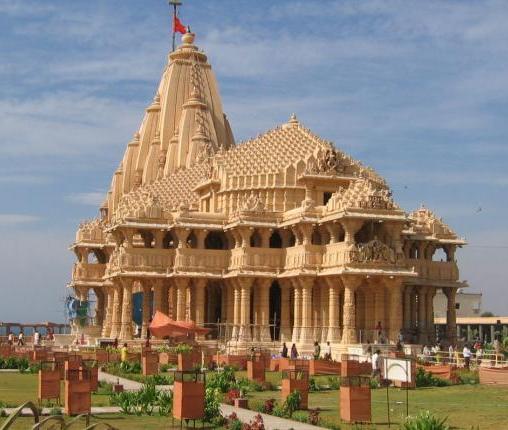 The Dwarkadhish temple or Jagat Mata temple was constructed 2,200-2,000 years back. Located at Dwarka, it is a Hindu temple in gujarat dedicated to Lord Krishna who is worshipped here as King of Dwarka or Dwarkadish. It’s a Pushtimarg temple and the main shrine of the temple is known as Jagat Mandir or Nija Mandir. Dwarkadish temple is one of the four Char Dham pilgrimage spots. 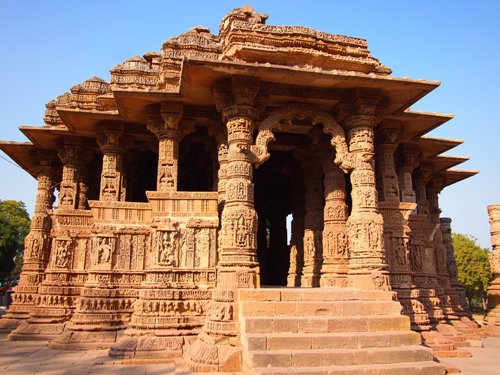 The Sun temple is dedicated to Surya, the Hindu Sun God. It is located on the bank of Pushpavati River in Modhera. Built in 1026 AD by Raja Bhimdev of the Solanki dynasty, the temple is divided into three sections, namely, Surya Kund, Sabha Mandap and Guda Mandap. In the Surya Kund, devotees perform ceremonial ablutions before worshipping Surya. The Sabha Mandap has carvings of Ramayana, Mahabharata and Krishna Lila. Modhera dance festival is celebrated in the third week of January every year in the backdrop of the Sun temple. 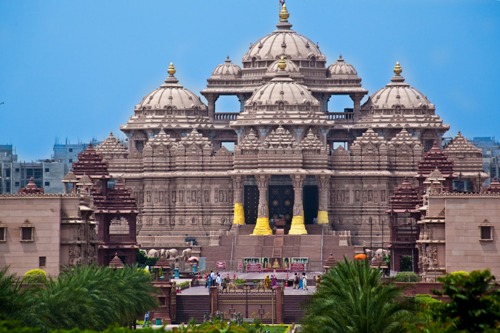 The Akshardham mandir in Gandhinagar is 108 feet high, 131 feet wide and 240 feet long with 97 carved pillars, 17 domes, 8 balconies, 220 stone beams and 264 sculpted figures. The central chamber of the temple has a seven-foot-tall, golden-leafed-idol of Swaminarayan, who initiated the temple complex. There are idols of Aksharbrahma Gunatitanand Swami and Akshar Mukta Gopalanand Swami. The mandir is divided into two floors, the Vibhuti Mandapam and the Prasad iMandapam. 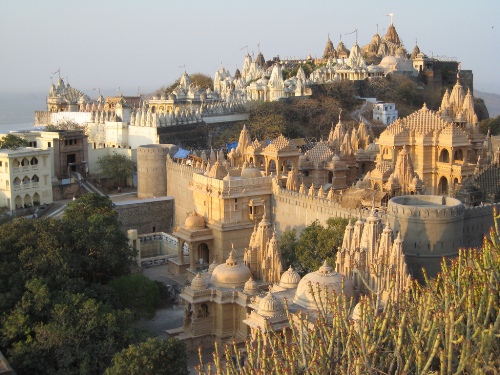 Shri Shatrunjaya temple is located at Shaturnjaya in the city of Palitana. This spot along with Shikharji in Jharkhand is considered the holiest of all pilgrimage places by the Jain community. This city of Palitana was named as ‘City of temples’ and thus it was built to be an abode of divine. Jains believe that a visit to all the temples in Palitana will help in achieving Nirvana or salvation. There are 863 marble-carved temples among which the main temple is dedicated to Rishabha. 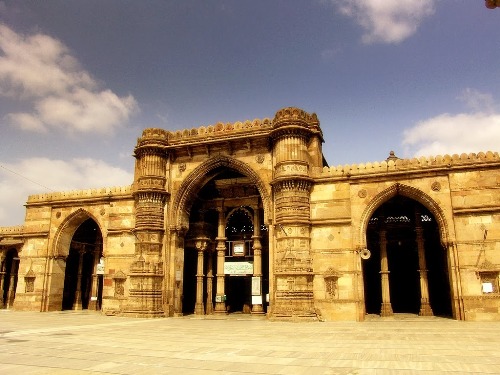 Jama Masjid was built in 1424 during the reign of Ahmed Shah located outside Bhadra fort area in Ahmedabad. The tombs of Ahmed Shah I, his son and grandson are to the west of the mosque and the graves of the queens and other wives of the King, Rani no Hajiro are nearby. The mosque was originally constructed for the private use of the Sultans but now it is open to all Islam. 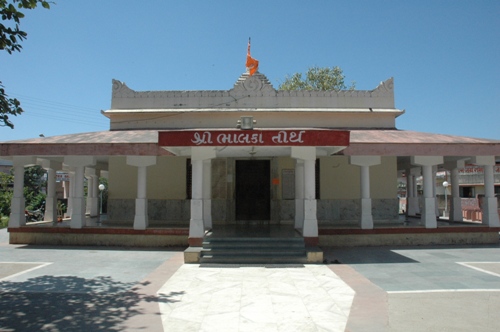 Bhalka Tirtha is the place where Lord Krishna was mistaken as a deer and shot by an arrow by a hunter named Jara, after which it is believed that he had left the earth for heavenly abode. It is located in Prabhas Kshetra near Veraval in Saurashtra. The Bhalka Tirth temple is presently under development for turning it into a major tourist spot. 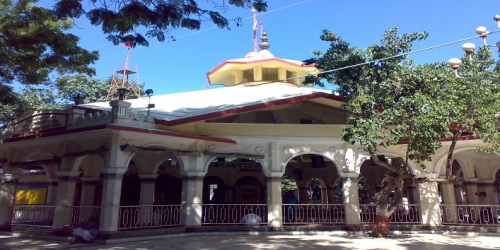 The Bala Hanuman temple is located on the southeast bank of Ranmal Lake or Lakhota Lake. The temple is famous for its continuous chanting of ‘Shri Ram, Jai Ram, Jai Jai Ram’ since 1st August, 1964. The temple has been listed in the Guinness Book of World Records for this very reason. The temple remains open 24 hours a day and it is said that to witness the prolonged act of devotion, one should visit the temple at late evening or night and participate in the chanting. 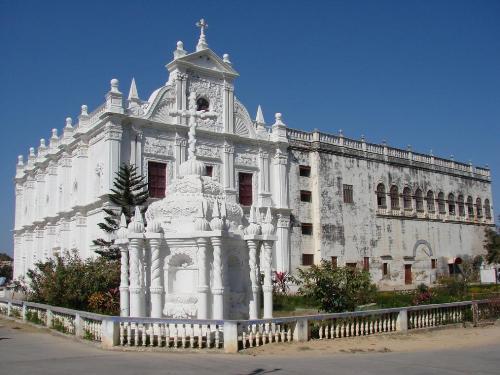 St. Paul’s Church in Diu was built by the Portuguese and is named after St. Paul, the Apostle of Jesus. It is the most renowned, surviving and functioning church in the town of Diu. It is an example of Baroque architecture and the altar has a statue of St. Mary. The feast of the eleven thousand virgins and to mark the commencement of school year is celebrated in the church along with a feast on 25th January to mark the conversion of St. Paul. 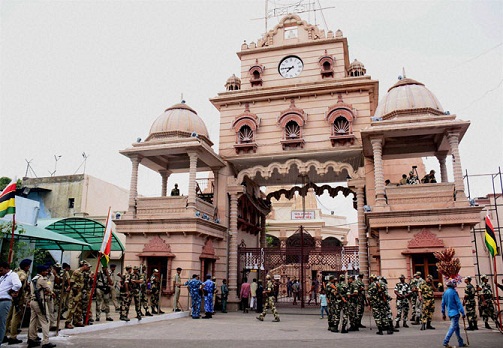 This temple is located in Ahmadabad and is dedicated to Lord Jagannath. It was established 450 years ago by Sadhu Sarangdasji and is famous for it Ratha Yathra festival. During this festival, the chief minister cleans up the path for the chariot procession. This temple was attacked by muslims during the 1969 Gujarat riots. The Rath Yatra performed in this temple is the largest and the most prominent after the Rath Yatra of Puri. 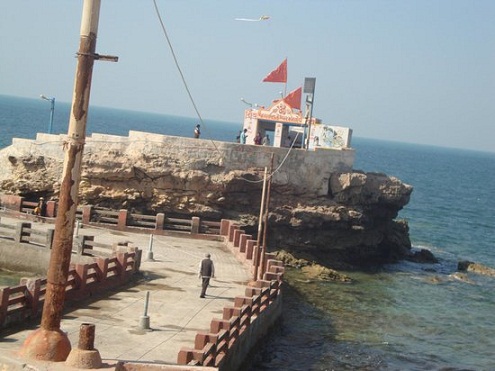 The Bhadkeshwar Mahadev temple is the abode of Lord Shiva, whose Shivalinga was found in the Arabian sea about five thousand years ago. This temple is submerged in the ocean for a period of each year and it is said that this is for the ocean to perform Abhishekam to the linga. Shivaratri celebrated with utmost devotion and is a grand affair with devotees. This is also popular for witnessing the sun rise and sun set in the ocean. 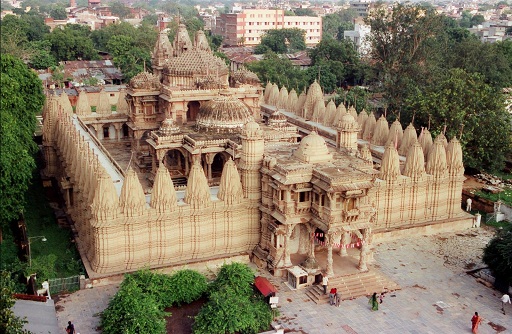 This Jain temple was constructed in the year 1848 and is one of the prominent Jain temples of India. It is located in Ahmadabad and was funded by a rich Gujarati trader. This temple is managed by the Hutheesing family trust and hence is the name. Inspite of severe famine, this temple was successfully built by artisans over a period of two years with a sum of 8 lakh rupees. The entire temple is exquisitely made up with ornamented carvings all over. 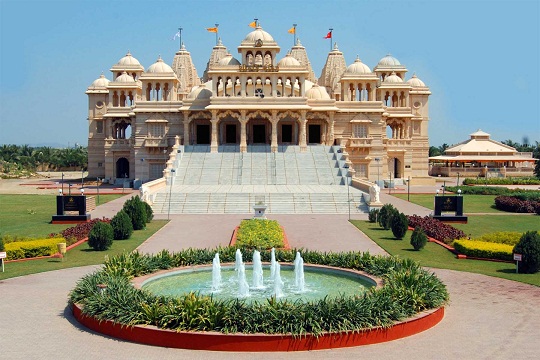 The Sandipani temple is located in Porbandar and is dedicated to the friendship of Krishna and Sudama. This is the only place in the world that is reminiscent of the loyalty and devotion of Sudama. This temple is called the Shir Hari Mandir, which took 13 years to construct. This is one of the grandest structures of Gujarat temples and attracts both Indian and foreign tourists. It is located in serene atmosphere and picturesque location. 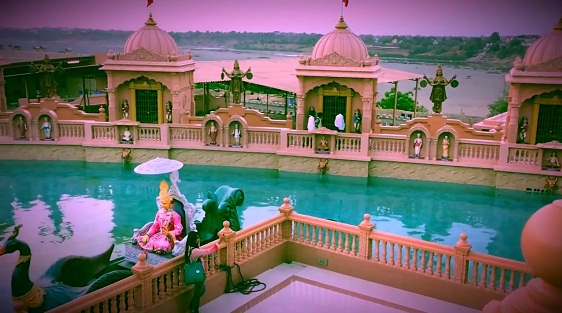 Nilkanth Dham Swami Narayan temple is located at Poicha village and is one of the most famous tourist attractions of Gujarat. It is one of the Swami Narayan temples of India and was established to protect Indian culture and heritage. This temple is an example of master craftmanship and skillful architecture. It has intricate carvings and extraordinary domes which attracts a great number of tourists all round the year. 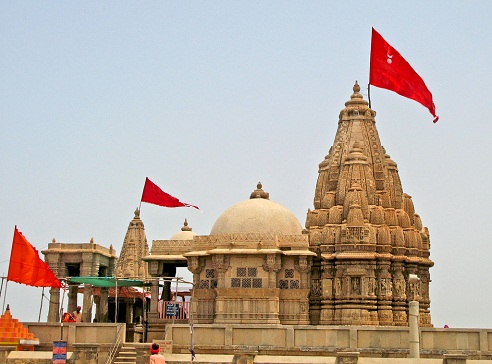 The Rukmini temple is said to be almost 2500 years old and is located in Dwaraka, the birth place of Krishna. It is dedicated to the worship of Rukmini, who was the chief queen of Lord Krishna. This temple has exquisite carvings of gods and goddesses all over and is quite an impressive structure. Legend has it that Sage Durvasa cursed the couple out of short temper, due to which Rukmini got separated from her husband and hence there are separate temples for them. 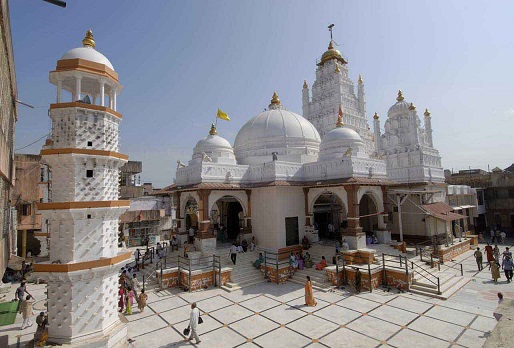 This temple was originally a shiva temple called Danknath Mandir. Later, it was developed into a Vaishnavite center and worships Lord Vishnu. This temple was built in the year 1772 AD and Lord Vishnu is worshipped in the form of Lord Ranchhodrai. The temple was constructed by Shri Gopalrao Jagannath Tambwekar and has eight domes. The idol has four arms which hold the lotus, conch, disc and the mace. It is also told that the right hand of the idol has a small flute as he is the younger version of Krishna. 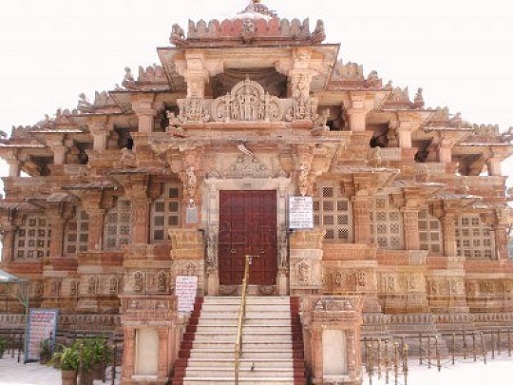 Shamalaji temple is another popular pilgrimage destination for Hindus in Gujarat. This temple is located in the Aravalli district and worships Krishna. It is told that this temple was built in the 11th century and was renovated about 500 years back. The temple is built in the Chalukyan style of architecture and was also once a temple for Jains. This beautiful temple has intricate carvings of elephants, Gods and other structures which attract the tourists. 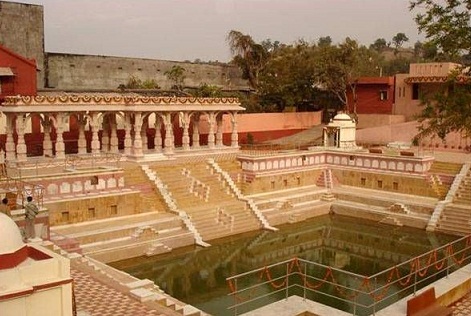 Mansarovar is a fresh water holy tank that was built in the 16th century. It is quite popular among devotees and tourists who take a dip in the pool before entering the temples. There are two temples beside this tank of Mahadev and Ajay Devi. It has clean water and beautifully desgned steps to enter the pool. One can experience holiness and a feeling of being closer to divinity by taking a dip in the water of this pool.

Check Out the Top 10 Temples in Each Sector of Gujarat:

By the end of this article, we hope you understand why this state of so popular for religious tourism. Gujarat is one state that has significantly contributed to protect Hinduism and Indian culture. These temples are embodiments of the rich heritage of our country which have been preserved for so many centuries. Most of these temples are quite ancient and despite invasions and foreign threats, they have withstood in time to tell us the story of the gone by era. Not only are they known for the beautiful art and architecture, but also for their connection with our Indian mythology. This is the proud land of Sri Krishna Janmashtami!