It is a well known fact that almost all celebrities are always under scrutiny for the clothes they wear, the appearances they portray and the people who they are spotted with. Rani Mukherjee, the once proclaimed Queen of Bollywood had everything going for her. She was the undisputed box office hit maker, churning out hits almost every year. She also came into the public eye for some of her appearances with her male co-stars.

However, her ability to tap into her emotions and deliver stunning performance alongside some of the best actors of her generation made her a household name. Despite her current lack of roles and rare on-screen appearances, she will always be remembered for those big beautiful eyes as well as her long hair and impeccable style which she carried with utmost grace and poise.

Despite the fact that she has been spotted without make-up on quite a few occasions, she has still managed to maintain the poise and grace she is well known for.

Rani is spotted here with an oversized but very stylish parka which complements her light coloured eyes perfectly. Her eyebrows and hair are immaculately maintained and despite having no makeup on she still manages to radiate a certain kind of glow that makes her striking. Her features are on display, especially those perched cheekbones of hers. Rani is seen here sporting a bright yellow tee which promotes harmony. Ironically, her features are in perfect harmony with each other and are letting out a particular glow. Despite having no makeup and in casual attire, she still looks dignified and classy in an understated way. Her white wristwatch also adds a touch of class to her outfit. Apart from a gorgeous smile, Rani is also well known for her long locks which she maintains really well. After being felicitated at the airport, Rani, despite no makeup at all, manages to light up the shot with her beaming smile. The plain white top and her designer bag are a perfect complement to her dusky features. The orange garland also adds a bit of pop to her wardrobe. In this image, Rani channels her intellectual side while she gets into a waiting car. Despite wearing no makeup, she still radiates warmth with that beautiful smile of hers. The detailing on what seems to be a kurti is great and makes her look good. Her well-manicured nails have been filed well and are well-maintained. 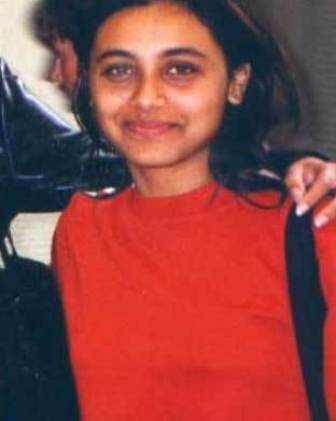 Rani absolutely stuns in this red sweater which she dons in this photograph from her early days as a female actor. The sweater takes the shape of her svelte figure perfectly and accentuates her good physique. Her smile, as always is a stand out feature which she always sports without fail. Nothing exudes comfort like a nice sports jacket. Rani ditches her beautiful saris for this black velvet and grey jackets which she sports with a smile. The earrings that she is wearing are very classy and add a touch of sparkle to her attire. Rani goes for a morning jog in a cute ensemble that is very girly but functional at the same time. The combination of pink, blue and brown complements her skin tone well. The pulled back hair also accentuates her stunning features, which she then completes with a wry smile. The paparazzi like nothing more than to catch a glimpse of a star. Rani, wearing a very cute star motif cap, looks like she is ready to call it a night. The specs are also a great accessory. Rani is seen sporting a cute black overall. The big spectacles are a perfect match to her oval shaped face. That beaming smile is never out of place. Rani is also known for being a fitness freak. Her dedication to yoga is one the main reasons why she is toned. Exercise also keeps her skin glowing she once said.