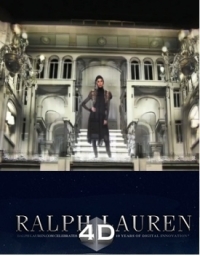 It seems that technology seems to match perfectly with fashion as Ralph Lauren decided to celebrate the smashing decade of online marketing with a fabulous 4d visual show. The Ralph Lauren 4D visual experience was an absolute delight and it was featured simultaneously in New York and London, two of the world’s most fashionable cities. The 4 D Ralph Lauren show features a fabulous 3 dimensional projection while the 4th element which contributed to the 4D effect was actually based on people’s olfactory sense, as the new Ralph Lauren fragrance was subtly dispersed into the air. Now that is a new interesting way to celebrate fashion.

The film which has been projected onto the buildings don’t look cheap and it’s been rumored that they were quite pricey, the sum revolving around a few million dollars but even so this is “small change” for this multi-million dollar corporation.