The picture of an open heart is etched across the cigarette carton with bold words saying tobacco causes lung cancer. One of the most common lung condition created by disease is the lung cancer, i.e. the formation of cancerous cells within the lungs that is progressive and life threatening in nature. Right in the middle of our chest is two sponge like structures called lungs, left lung and right lung to be precise, where on a daily basis fresh oxygen enriched blood comes and leaves.

The trachea or wind pipe takes the inhaled air from the nasal pipes through itself and ends up in small branches inside the lung. Here the oxygen is filtered consumed and piped down to the rest of the body. The carbon dioxide accumulated then leaves through these trachea branches and out through our nose as we exhale. A thin layer veils the lungs called pleura that helps the lungs beat against the chest without causing friction. 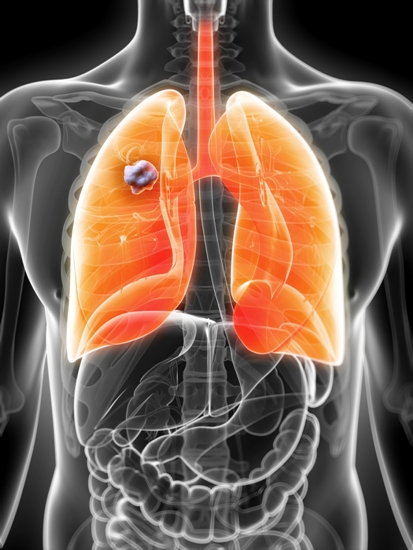 The trachea that reaches down to the lungs inside it gets divided and subdivided into parts and smaller tubes called bronchi. This is the prime place where the cancer cells first look for shelter. The cancerous cells forming inside are abnormal cells which have great power to multiply themselves triple the speed of normal cells. But at first, no tumor or lump nodule is formed. It is only when this cancerous cells flourish under nourishment of pure blood and oxygen do they start acting up eventually forming a tumor. A lot many times these tumor cells metastasize, that is, the mother tumor cell breaks a small part of it and plants itself in another region causing cancer cells to expand.

Usually cancer cells in the lungs are categorized into two different points.

Small cell lung cancer is named after the characteristic and structure of the cancer cells formed inside the lungs which is common for a smoker or someone who consumes a lot of tobacco. This cancer cells usually take shelter in the centre of the lungs eventually spreading its wings on all sides. This is a rare case.

The long cell lung cancer is the most common type of lung cancer named after their cell structure which unlike the former is larger in size. These cells are then further subdivided on the basis of their construction and chemical content.

Causes And Symptoms Of Lung Cancer:

This article tells about what are the Lung Cancer symptoms and causes which are useful know to this dangerous health problem.

Often a heavy smoker has a high chance of risking a lung cancer amongst the other people. Some of the causes due to which lung cancer is born are enlisted below.

By far the most number of lung cancer cases pulled in recognizes their patients as heavy smokers. The doctors say 90% of the patients are victims of chain smoking. The chance of you risking a lung cancer is directly proportional to the amount of smoking. That is, the more one smokes the more chances they perceive of getting affected by lung cancer. Smoking at an early age enhances the chance by 30% more. However a proper cure to this is to quit smoking so that in the near future you reduce the chances of smoking. Pipe smokers are also in line however tobacco smoking cases are the most common.

Another reason why you might be at risk is because of passive smoking which is harmful to avoid. Many a person do not smoke but inhabiting in an environment where almost all people do, passive smoking can be a pathway.

This world is filled with a dangerous case of pollution with the air being infected by dust and toxic pollutants. One cannot help but inhale the polluted air which is why even if you do not smoke you are at a chance of risking lung cancer. this is however a really common case and mostly applicable for people who have weak immune system.

The place you work in might also determine the chances of you getting a lung cancer. Often exposure to certain chemicals or elements might make you an easy prey to lung cancer. The first in the deadliest list is the asbestos followed by silica and so on. This is why often workers related with these elements suffer lung problems or cancer.

There is always a question of passed on genes that you are bearing. If you have a case of lung cancer in your past generations, chances are that you might as well too have that gene as a curse. This lung cancer gene either gets passed on to the next or coming generation or it stays dormant and does not react. This is why a soon to be mother who smokes a lot should be careful not to pass any gene to the coming baby.

Even though all the lungs cancer causes are linked to cigarettes, the main culprit forever remains the nicotine and more importantly the tobacco. Tobacco contains within itself two products namely the polycyclic aromatic hydrocarbons and nitrosamines, both of them responsible for providing a hostile situation for lung cancer to prevail. Hence, to reduce the possibilities of concocting lung cancer, one also has to reduce the intake of tobacco. A lot of people, non smokers to be precise might get into a habit of chewing tobaccos, a trait that will cause them harm later.

Even though work hazards are mentioned before, the threat doesn’t lie in asbestos alone. There are a lot of other significant yet underrated work hazards through which the probability of getting lung cancer might be high. Often there are certain chemicals that should be kept away from including diesel exhaust. Some of those chemicals apart from silica are nickel, arsenic, cadmium and even coal fumes.

Bronchial carcinoids are both the reasons and a type of lung cancer caused by the damaging of cells in your lungs that gives birth to these abnormal cells that are cancerous in nature. These cells multiply at a double speed than the usual ones and often would account to proliferation of the lung cancer more if not treated at the right time.

Causes of lung cancer can also be linked with radon gas. Radon is a natural decay of Uranium and it naturally decays to emit highly harmful radiation. Radon gas is often found underground which can travel up the soil and enter your house through a shallow base or through the underground pipes. What’s more dangerous is the detection of the existence of the gas around you, it being color and odor less in nature. Radon gas lung cancer causes according to a study showed the maximum number of cancer problems in most of the US citizens victimized by lung cancer.

As mentioned before, pollution, air pollution to be precise is a strict reason why lung cancers might occur. Now a body with a weak immunity is of course at all points of time prone to succumb to the diseases caused by these air borne pollutants thereby lessening your body’s defense shield all the more. This is when a weaker immunity can be indirectly responsible for lung cancer.

A lot of lung cancer risks has been related to previous lung diseases. This brings us back to the topic of immunity where if your lung is too weak to handle one blow to itself, chances are that you might attract lung cancer. If your lung is prone to misbehave, maybe through tumors or other lunch problems as such pulmonary fibrosis or COPD which are actually diseases that increase the chances of lung cancer. Also, if you are a surviving lung cancer patient, don’t think your risk days are over, cause a feeble lung is the perfect breeding place for the cancer cells.

Cancers are pretty self explanatory and that is why often some common signs symptoms announce their arrival.

Another symptom to lung cancer is excessive coughing that won’t quit. This prolonged coughing is not normal and should be immediately taken care of. It can be in the form of dry cough or mucous related cough. Often if prolonged for a longer time one might experience blood and mucous along with their cough.

Often when our body is going through something serious, the cancer cells use up all the body energies thereby significantly reducing our weight to a sweet nothing. A massive loss of weight might sound alluring but once your breastbones and collar bones start sticking out and you feel easily fatigued and exhausted it wouldn’t be a pretty scenario then.

If the cancer cells have affected the trachea or wind pipe chances are that one might experience breathlessness, this shortage of breath can be reoccurring suggesting a tumor or cancer cell to temporarily block the path. Physical activity like jogging or simple climbing up of stairs might cause this reaction to stir.

While chest pains are quite common during lung cancer, yet another symptom to keep an eye out for is the sudden appearance of bone pain which many due to age bars consider a arthritis problem. However, it has been documented that many a times bone pain has been related to lung cancer as well, especially the joints.

Lung cancer symptoms may also occur in the form of repeated lung troubles. Here we are referring to minor yet repetitive problems of the lungs showing up every now and then. Not only are they weakening your system but also is sign of an ongoing cancer problem.

Wheezing and cough is quite common indeed when it comes to lung cancer but often when things might take a much serious turn as your coughing is accompanied by drops and spots of blood.

Often lung cancer symptoms show swelling of body parts, especially the neck and the face region. This is where your face much like a common allergy starts swelling up, just a little every single say. Along with this the inevitable joint pain occurs even to the point where your joint or bones start swelling up.

When you feel the days getting bigger and bigger and your patience to endure the day getting smaller with each passing day, you should know something is up. Uncalled for weakness during the healthiest days are something that we always pass it off as a not so serious affair. However, little do you know that your body might be giving you signs to see otherwise. If persistent fatigue continues even after a healthy night’s sleep and proper meals, consult the doctor.

Symptoms of lung cancer also include loss of appetite. Often at times you might suddenly realize how your eating habits have changed, rather decreased with the passing time. Loss of appetite however can be aggravated by quite a few common every day reasons as well, so make sure you know your reason perfectly.