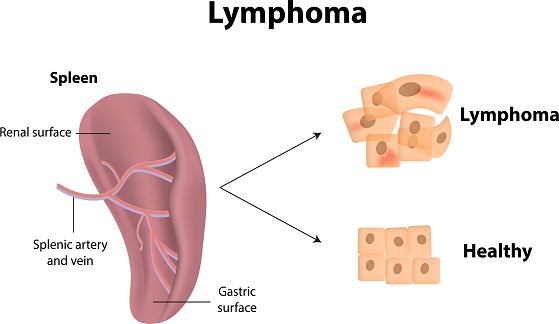 To know the cancer sources, a brief knowledge about the contents of the lymphatic system needs to be explained. The thin tubes that run up and down our body is described as the lymph system with the major organs like spleen, tonsil, adenoids etc forming a part of it. Its main aim is to keep the body safe by filtering the blood vessels, lymph fluids and by helping our body prepare itself for germ protection against foreign antibodies. These cancer cells are categorized into two main divisions, one being the Hodgkin lymphoma and the other the non Hodgkin lymphoma.

The Hodgkin’s lymphoma as named after its inventor is a very rare case with almost 3 % or less people suffering from it. Here the cancer cells are of a definite structure and construction with the same consistency so alike that all the cells match one another under microscopic view. The non Hodgkin lymphoma is the rest 97%. These cells affect mainly two type of leukocytes or lymphocyte, B cell and T cell to be specific. Because of the minute veins running Hayward across the body, these cancerous cells can form anywhere.

When one is affected by lymphoma the white blood cells starts behaving abnormally, multiplying at a faster rate than normal blood cells but these are not mature cells and due to abnormality they do not die naturally. As a process they crowd more and more in the body. Their inability to fight germs for the body makes them all the more useless. These WBCs increased in amount then crowd the marrow, liver or spleen eventually forming a malignant tumor.

Causes And Symptoms Of Lymphoma:

There might be several lymphoma symptoms and causes, but here we mention some of them only.

Even though the doctors are not sure about the source certain causes which have affected in the past can be :

Both Hodgkin and non Hodgkin diseases are based on certain age types. Within that range of age one is likely to be a victim of these weakened immune system failure due to cancer cells. Usually for non Hodgkin lymphoma the age count starts from 60 and over but Hodgkin diseases are known to affect people either in their mid youth that is the twenties or twenty-fives or the people over 55 years of age.

Even though usually non Hodgkin lymphoma does not get passed on from generation to generation, some types of lymphoma, Hodgkin’s or chronic lymphatic leukemia to be specific might affect family members down the line. It is often seen that the next generation is likely to suffer a chance of getting lymphoma.

Lymphoma can be a result of you being exposed for a long time in harmful radiation. The first radiation to think of is the nuclear radiation which even though may not victimize you, generations earlier experiencing such radiation passes on the genes which makes the immunity shaky and thus easy to conquer. Then there are certain chemical exposure too such as agricultural harmful effects and exposure to harmful chemicals like radon.

People who have already been affected by HIV infection has a very weak immune system which is the perfect time for this cancer cells to form in nooks and crannies of your body making your body an ideal host for harboring these cells.

It is noticed that Caucasian people are more in risk of getting these cancer rather than those of the African American or Asian origin. Also the place has been a significant factor since unlike many other diseases, this condition is mainly prevalent in the developed countries such as US, UK, Canada etc.

A few individuals are more at danger of lymphoma on the grounds that their safe framework (a framework in the body that shields us from contamination and different sicknesses) does not work regularly.  An overactive safe framework, which can happen when individuals have immune system issue, can likewise prompt an expanded danger of specific sorts of lymphoma.

Certain lymphomas are connected to specific diseases. A couple infections cause lymphomas specifically – the infection lives in the lymphoma cells and makes them develop and isolate. Different infections and microbes cause lymphomas in a roundabout way – the disease fortifies the resistant framework chronically (over quite a while), which makes lymphoma more inclined to create.A considerable lot of these diseases are regular and the vast majority who have them don’t create lymphoma. This implies different things must happen too for a lymphoma to create.

Lymphoma is not acquired – it is not gone down from era to era. The vast majority with lymphoma have no family history of the sickness. Having a sibling, sister or guardian with lymphoma (or another blood disease) gives individuals a somewhat higher danger of creating lymphoma – roughly multiplying the chance for some sorts.

Mechanical chemicals, pesticides and hair colors have all been taken a gander at as could be allowed hazard variables. As these chemicals are all the more regularly utilized as a part of specific occupations, considers have additionally taken a gander at the work that individuals do. A few studies have recommended joins, however potentially just for specific sorts of lymphoma.

Numerous growths are brought on by smoking yet there is a great deal less proof that it prompts lymphoma. Smokers might have a somewhat expanded danger of follicular lymphoma and of the EBV connected type of Hodgkin lymphoma.

Some Symptoms that Occur During or Before Lymphoma are:

Usually the arrival of lymphoma is announced by the lymph nodes swelling up especially in places like the neck which is supposed to be one of the most common places a symptom arises. There are also places like the back neck and groins where swelling of lymph nodes can be felt.

Often lymphoma comes with an onset of high fever so bad that you feel chills run down your body as your body temperature reaches its highest. These fevers are reoccurring in nature.

Whenever there is cancer involved a certain amount of weight loss is inevitable. The cancer cells being abnormal in nature produce and multiply fast and during the process takes up a lot of the energy from the body. This causes a rapid weight loss so bad that it takes away half of what you original weight used to be.

Often the appetite loss follows right alongside the fever and chills.

Yet another symptom to lymphoma can be explained as excessive coughing. These may be dry in nature or whizzing cough coupled occasional chest pains. Along with this comes tiredness and shortage of breath that makes the chest heavy causing breathing troubles.

Often at times an episode of itching may arise which can be proliferated after alcohol intake.

A few growths have all the earmarks of being more normal in individuals who are large. Confirmation of a connection with lymphoma has been found in a few studies and not in others. This most likely implies that in the event that it is a danger variable, it is not a solid one. Perhaps it is essential just if individuals are extremely overweight. On the other hand it might be that horrible eating routine and absence of activity are the genuine dangers for both heftiness and lymphoma.

Taking more physical activity has been appeared in a few studies to bring down the odds of creating lymphoma.

There is some proof that eating a lot of foods grown from the ground, as opposed to bunches of red meat, creature fat and dairy items, makes individuals less inclined to create lymphoma. Liquor, espresso and tea have all been taken a gander at however there is no proof that these expansion the danger of lymphoma.