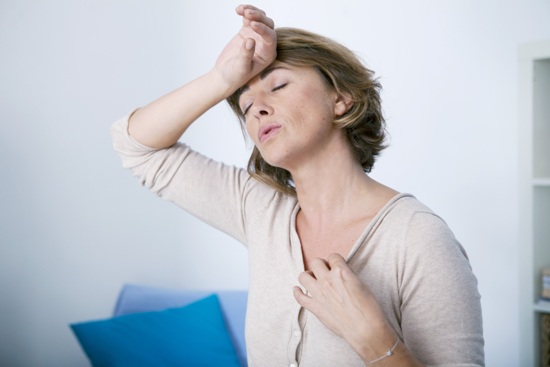 Menopause is the approaching end of a woman’s reproductive ability. This natural change usually takes place during the mid 40’s in a woman’s life. This happens when the ovaries stop giving out an egg every month. Premature menopause is a also a common problem among women these days. The transition from a reproductive to a non-reproductive state is not abrupt or sudden. It is usually known as the end or pause of the monthly menstrual cycle or it can be more precisely defined as the permanent cessation of the primary functions of the ovary. The biological aging is also accompanied with many signs and symptoms in the years approaching towards menopause.  There are three well defined stages of this change.

It used for the transition period, both before and after the last release of the egg or in simpler words, periods, or when your hormone levels are still fluctuating.

This term describes the phase building up towards menopause and it is the beginning stage also.

Refers to the life after the last cycle release and it lasts for about a year.

During this massive biological transition, the body responds to the fast dropping hormone levels in various ways. Some show extreme changes while it is much smoother in the case of others. The degree of side affects various from person to person. The cycle shows irregularity and it becomes hard to predict the date for the next release. There might be changes in the flow of the periods; it may become lighter or heavier, more or less painful or longer or shorter. The hormonal withdrawal leads to a condition called formication, which is an itching or tingling skin sensation.Here we given the lists of what are the general, symptoms and causes of menopause.

Causes And Symptoms Of Menopause:

Hot flashes are episodes that are characterized with rapid heartbeat, excessive sweating and the general temperature of your body rising. It is the inability of the body to regulate temperature due to the changing levels of hormones and is also known as vasomotor instability.

The hormonal fluctuation along with the menopause transitional can experience bleeding from the vagina. Although this out of place bleeding shouldn’t be taken lightly and seek immediate medical assistance. The endometrium is usually the source of the bleeding.

Women mostly complain about a prolonged and irritating lower back pain along with pain prevailing in their joints and legs. Early menopause also speeds up the chances of Osteoporosis.

Mood swings are the most common complaint in this case and women often complaint about not feeling up to any occasion sometimes. They often explain states of depression and anxiety. Getting irritated is also a very common complaint. This can also be accompanied by frequently changing sleep cycle and insomnia.

The largest number of changes takes place in this area. The membranes in the vulva, vagina and cervix tend to grow thinner and the elasticity of the muscles and skin in this area is lost. The vagina can dry up, causing itchiness. Urinary frequency and urgency is another problem most women find it hard to cope with. This also increases the risk for urinary tract infections.

Depression is one of the most common menopause symptoms. Generally this occurs to women when they age. Depression can rupture the mental state of a woman, when she is suffering from early menopause. During menopausal stage, women have a tendency to stay depressed. One will stay depressed almost throughout the day, when he or she is suffering from menopause. It is one of the most growing issues these days

Another common symptom regarding depressions are severe headaches. A person will suffering from tremendous forehead pain and internal head issues if they are suffering from menopause. The headache is one of the most growing menopause causes and it can hamper the physical as well as mental condition of the body. It can reduce the proper functioning of the body. If the headaches are not reduced, there might be another problem. The issues of recurring headaches comes into the picture. There will be times, when a person has cured his headache issues but they don’t stop coming back. It is high time and you should  go see a doctor.

A rapid heart beat is not normal and when you’re such kind of heart beats pretty frequently, then this can be real issue. A racing heart is one of the most probable signs and symptoms of menopause. Apart from mere physical problems caused by almost any physical dis-functioning, racing heart is really common and can make a person sick and weak from the core. This is one of the most growing and most sighted menopause symptoms.

A person will face bladder problems, when he or she is suffering from the bladder issues. Urinary issues and bladder problems are pretty common during menopause. An individual will face such issues during menstrual cycle and pregnancy. A lot of people experience this symptom irrespective of their age and gender. Menopause make the bladder weaker and this is one of the probable reasons behind the growth of many urinary problem. After menopause, women can loose a few falls of urine while they are coughing or sneezing.

In women irregular periods can be said to be one of the prime symptoms of menopause. If a women is suffering from period problems or a vaginal dryness, then in this case there is also a chance that she might be suffering from menopause.

A woman is born with thousands of eggs, which are stored in the female reproduction organs, known as the ovaries. The estrogen and progesterone released by the ovaries are the hormones that control ovulation and menstruation.This is a natural process that happens around the 40’s but some women can experience menopause way earlier and this can happen due to a wide array of reasons.

The two hormones released by the ovaries regulate and control a lot of factors in a woman’s body. Changes in the level of these hormones take place when the ovaries stop releasing the eggs. When this happens before the normal time-frame, it is known as premature. Premature ovarian failure can lead to a lot of problems and complications in later life.

This happens when your ovaries are removed through surgical procedures due to medical reasons like endometriosis or uterine or ovarian cancer. Chemo and radiation causes extreme damage to the ovaries.

Post-menopause, women can also show a large number of problems in their bodies, ranging from rapid wrinkling of the skin to heart diseases to Osteoporosis. Vision and bladder functions are also affected.

But here is how you can deal with menopause,

♦  Ditch the fat and uncomfortable clothing when you start experiencing frequent episodes of hot flashes. Wear summer clothes; try to regulate your body temperature this way. Keep it cool and airy.

♦  When you have night sweats, keep an extra cotton set of clothing beside your bed so that once you are drenched in sweat, you can change.

♦  Stress can also trigger hot flashes. Keep an eye on how much pressure you can handle and when it becomes taxing. There are other triggers like caffeine, alcohol and tobacco. So cit out on these for a while, till you know you can handle the flash. Sleep deprivation can aggravate these flash episodes. So adequate rest and proper intake of food is a must.

Hot flashes and other imbalance can lead to disrupted night’s sleep which is a pre-requisite for good health. Try doing everything to have a good night’s sleep. Herbal teas and warm water baths help the best.

Garbhasana (Foetus Pose) – How To Do And Benefits