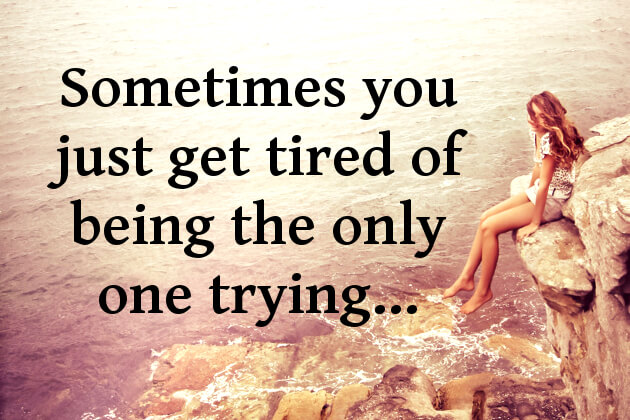 10 Signs Your Relationship Is in a Rut

Most long term relationships survive more than one rut, but it’s important to identify it and do something about it before it turns into a bigger problem. Learn to spot the signs of a rut in order to course correct and get your relationship back on track.

Find out which are the most important signs your relationship is in a rut. Once you’ve accepted that things aren’t moving in the right direction, you can make plans together to spend more quality time together and get some excitement back into your relationship.

1. The Cute Things Are Gone

You can’t expect the infatuation from the beginning of a relationship to last a lifetime, but it’s important to show your appreciation for each other regularly. If he stopped buying you flowers or surprising you with other little things, and you’ve stopped doing the small things he loves, it’s time for a change. Start by doing cute things for him, and if he doesn’t get the hint, be more direct about what you expect from your guy.

2. Your Sexual Chemistry Is Vanishing

When sex starts to feel like a chore or you just can’t synchronize when it comes to when, where and how, you’re seeing major signs your relationship is in a rut. Every relationship has dry spells, whether they’re caused by medical issues or pregnancy and childbirth, but having an active sex life can help you stay emotionally connected in the long run.

3. You’re Comparing Him to Other Guys

If you start noticing things you like in other men, that’s a problem. A wandering eye is a slippery slope and it can lead to emotional infidelity, particularly if you feel like there are intimacy issues in your relationship.

If you learn more about your significant other’s day from social media than you do from talking face to face, there’s a communication problem, and that can be one of the signs your relationship is in a rut. Make an effort to be honest with each other without being hurtful and to improve the way you communicate in order to get unstuck.

See also: The Dangers of Jealousy in a Relationship

5. You’re Having the Same Discussions

When the same topics of conversations come up and you both use the same arguments again and again, that’s a problem. It’s important to experience new things, both together and apart, in order to bring new things into the relationship and grow together, instead of staying put.

6. You No Longer Care About the Way He Looks

Maybe you used to give him fashion tips or make sure every piece of lint was removed from his jacket so he looks great when he leaves the house. When you stop caring or offering helpful tips about the way he looks, that’s an issue. Of course, you won’t be successful if you try to completely change his style, but not paying attention to how he looks is one of the signs your relationship is in a rut.

Your guy is probably just as funny as he always ways, but you stopped laughing at the jokes that are just OK. When you’re in a rut, your sense of humor might feel disconnected from his own, and your man’s jokes might end up more annoying than funny.

8. You’re Not Crazy About His Natural Smell Anymore

Pheromones play a big part in attraction, and when you’re in love, even his gym sweat smells hot. If that’s no longer the case, and you’re starting to dislike the way he smells when he doesn’t shower, it could be one of the signs your relationship is in a rut. Work on your other issues and you might appreciate his scent again. Unfortunately, there’s no way to fix morning breath.

9. You Run Out of Things to Say

Comfortable silences are great, but sometimes you just feel like you don’t have anything to discuss. If you’re starting to resent date night because you feel the conversation will lag, it’s time to do something, and the best first step is acknowledging the issue.

If you’re seeing quite a few signs your relationship is in a rut, it’s time to speak up. Pretending it’s not happening won’t do either of you any good. Start by improving communication and do something to get the excitement back, whether it’s a vacation, a new activity you both enjoy, or counseling.