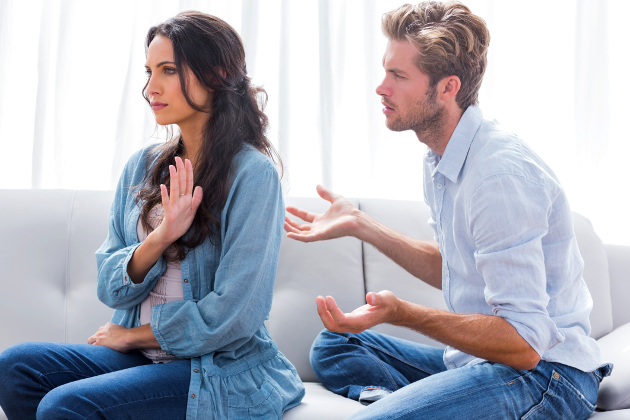 Whether you want to or not, there are plenty of ways in which you’re hurting the foundation of your relationship. Even if it’s not clear in the moment, there are quite a few attitudes that will put up an emotional wall and make him consider ending the relationship.

Find out more about the most common ways you’re pushing him away, and make a commitment to end the destructive behavior. From trying too hard to change him to disrespecting his family and friends, here are some of the ways you might be sabotaging your own relationship.

1. Trying to Change Him

Treating your guy like a work in progress that you’ll be able to complete isn’t just disrespectful, it’s also damaging to the core of your relationship. If you’re constantly on the offensive about how he dresses or his professional ambitions, you’ll start hurting his self-esteem. If you hope to fundamentally change him, you’re making a big mistake and both of you can end up getting hurt.

2. Always Having to Be Right

Rubbing his nose in it when he’s right and you’re wrong is also one of the ways you’re pushing him away and a recipe for disaster. Most couples counselors ask people who deal with a lot of relationship conflict what’s more important: being happy or being right? If you can’t stop yourself from humiliating your guy when he’s wrong, the relationship won’t last.

He needs to feel appreciated and sometimes it’s better to praise him on the work, not on the results. When he’s making an effort, whether it’s an emotional request or just household chores, be sure to praise him and show your appreciation. Ignoring his efforts and while always berating him for his mistakes is not healthy in any relationship.

More: 10 Worst Things to Say to Your Boyfriend

Insecurity is one of the least attractive traits, so making accusations without any back up is one of the ways you’re pushing him away. If you’ve been cheated on before and he’s showing the same red flags, he’s not the right guy for you. Remember that you shouldn’t stay in a relationship without trust.

5. Going After His Friends

Even if you hate them, bad mouthing his friends is usually a bad idea, particularly if you haven’t been together for that long. If you have conflicts with his friends and you’re asking him to take sides, he may end up choosing his friends. Try to be civil to the important people in his life, even if they’ll never become your friends.

6. Having Conflicts With His Family

While conflict with his friends is bad, starting conflicts with his family members is definitely one of the ways you’re pushing him away. Even if he’s not very close to his family, you shouldn’t create extra problems or try to drive him even further. Being respectful and polite to his relatives is the best way to go, even if they can’t return the courtesy.

7. Pushing Too Hard for Commitments

It may be a cliché, but when your main focus is getting the ring or moving in together, the relationship will suffer and you can drive him away. Trying to guilt him into commitments will only push him further. Even if you get the result you want, the way you got there might breed resentment in your guy.

See also: When You Boyfriend Hates Your Friends

Even when you’re arguing, treat him the way you’d like to be treated yourself. Some things can’t be unsaid fighting dirty is one of the ways you’re pushing him away. Don’t get too hurtful on purpose and don’t bring up the same issues again and again. If you’re always having the same fight, you’ll drift apart.

9. Making Him the Center of Your World

When your whole life revolves around him, he might back down. Finding fulfillment outside of your relationship is very important for your couple. If everything is just about him, your behavior becomes suffocating and that may push him away.

While your partner can help you get over some insecurities, you can’t expect him to be in charge of managing your self esteem all the time. Thinking you’re not good enough for him and demanding validation all the time is easily one of the ways you’re pushing him away.