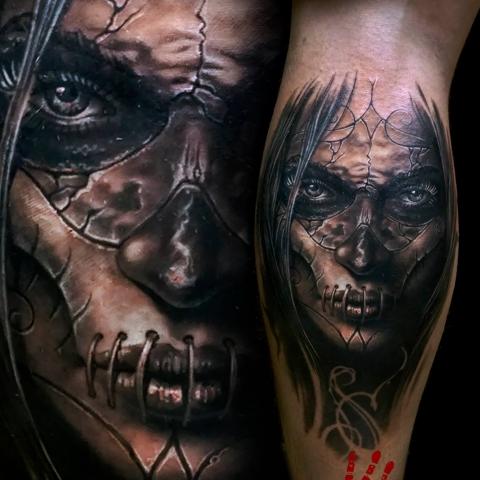 9 Latest and Best Ideas for Macabre Tattoos with Images

Macabre means something that is concerned with death and hence disturbing. Lately the term macabre is synonymous with horrible, gruesome, appealing, dreadful etc. The theme might not sound very interesting but tattoo artists have found many elements of creativity within it. The word macabre is very generic; something that might terrorize some one might not be that much scary for others. Hence in the following top 9 macabre tattoos are described which can give almost everyone spine chilling spooks.

Top and New Designs of Macabre Tattoo Ideas for Men and Women in Trend:

Let we have to look at the 9 macabre tattoo designs.

Just think for once that you wish to voice your views but cannot. The feeling itself is terrible. When the reason for not doing so is your lips are sewed together, it becomes dreadful. The sewed face macabre tattoo portrays a dark skinny face whose lips are sewed together. The face seems emotionless and warned off which transforms the tattoo into an element of horror. 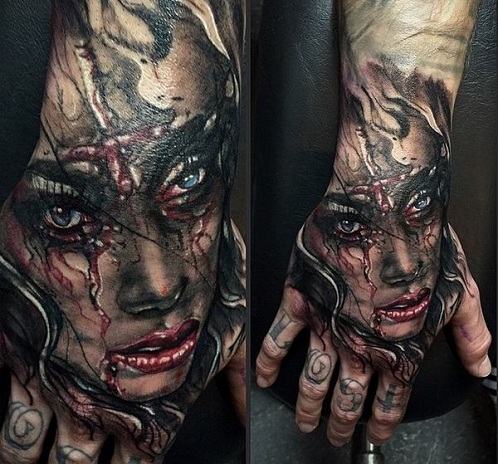 This bloody tattoo looks like a girl’s face that has been beaten badly. The whole face seems distorted with bruises all over it. The bloody tears dripping from the blue eyes make the tattoo a horrible yet abstract art. 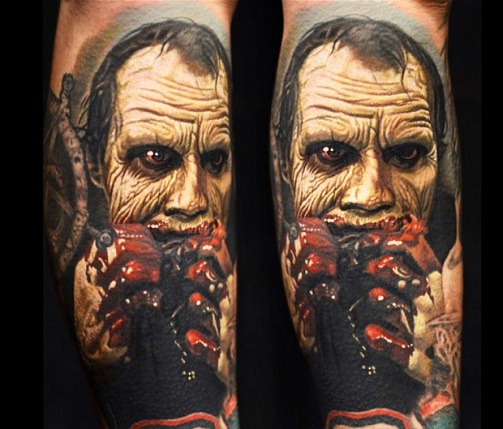 Zombies and vampires give many of us nightmares. Imagine if made into a tattoo, how terrifyingly macabre it can be. The graphic tattoo shows a zombie eating human flesh. The emotionless wrinkled face is well detailed and has turned out to be quite spooky. 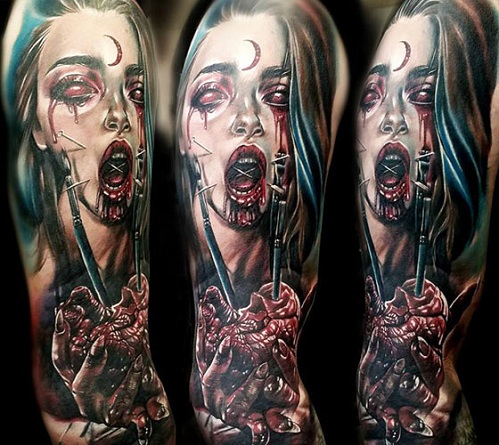 Witches and wiz craft just might be an urban legend but the very idea of it gives many of us nightmares. This witch tattoo has included all the components of horror in it. Blood dripping from the eyes of the dead, a witch can be seen eating a human heart. The mouth is pierced with cross needles while the witch continues to perform her black magic. 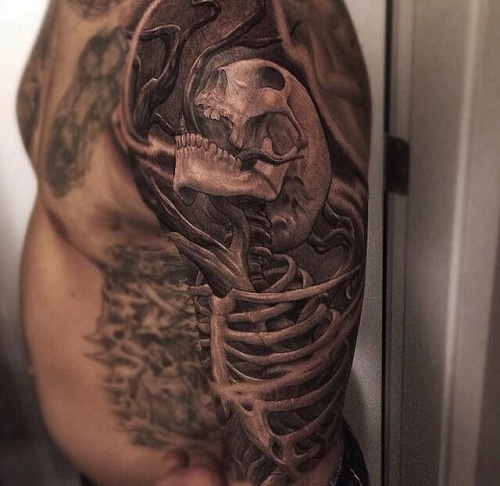 It is true that as we grew up, we became less concerned about monsters underneath our beds. Yet at our subconscious mind, the disgust remains and we all will find the idea of tattooing horrific monster figures a bit crossing the lines. Many monster tattoos have been made with perfection yet getting inked with this highly graphic skeleton monster tattoo needs lots of courage. The proper use of shades and colour has made this macabre themed tattoo perfect piece of art. 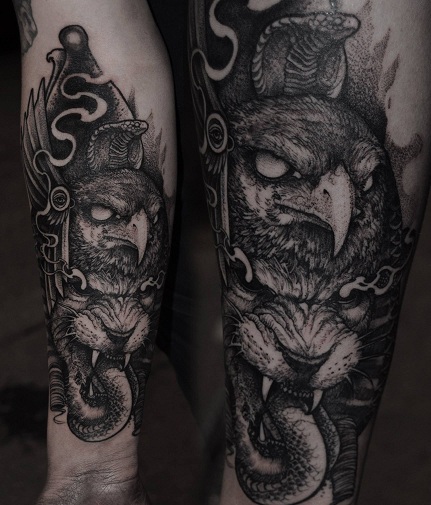 We all fear one animal or the other. Animal themed macabre tattoo was already very famous. This animal macabre tattoo has taken the theme to a totally new level of spookiness with combining more than one such being. A cobra, an eagle, a sabre-toothed all of them having their own twist of horror has made this tattoo horrific. 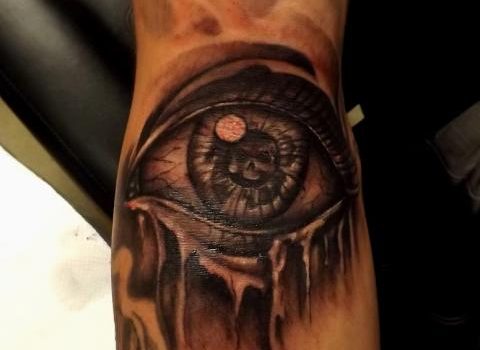 It is said that we can peek inside one’s soul through their eyes. Eyes reflect happiness, sadness and also fear. This amazingly abstract and signifying tattoo shows an eye which is melting out of evident fear. The tattoo detailing is amazing. Look closely and you can see a skull like an object on the eyes reflecting. This tattoo makes the macabre genre of tattoo more appealing. 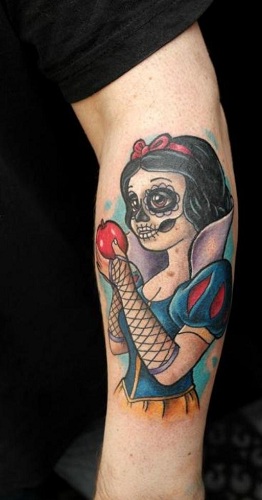 We all fear the dark side of every positive character primarily because it strikes directly in our conscience. The evil clown for a long time has been a subject of horror in books; movies and tattoos alike. Evil cartoon figures have their own fear factors. This evil looking snow white tattoo with sewed lips can be the reason of sleepless nights for many. 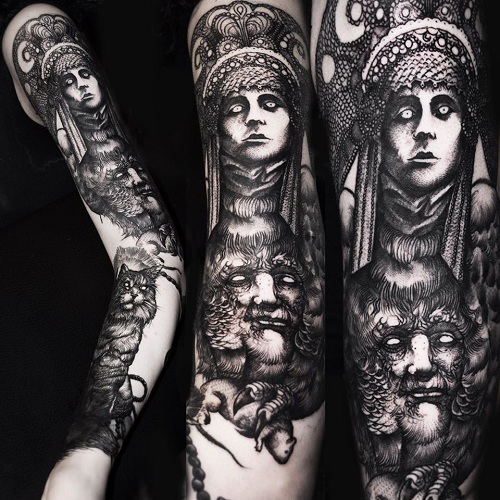 Black magic, voodoo dolls, devil worshipers; it all might just be a myth, still is scary as hell. This macabre genre is extremely vast and a diverse range of tattoos can be designed taking ideas from it. The creepy black tattoo showcases the theme properly and has the exact amount of scare in it. Two ghostly figures can be observed, and at the below a claw with a mouse. The tattoo detailing is pretty much awesome and stunning to look at. It also carries out the purpose of it: pure macabre madness.

As discussed in the beginning, the topic is so fast that you can easily ink what scares you the most just in order to conquer that fear. While some fear drowning, some are afraid of heights the macabre themed tattoo designs have an infinite amount of potential with respect to designs. 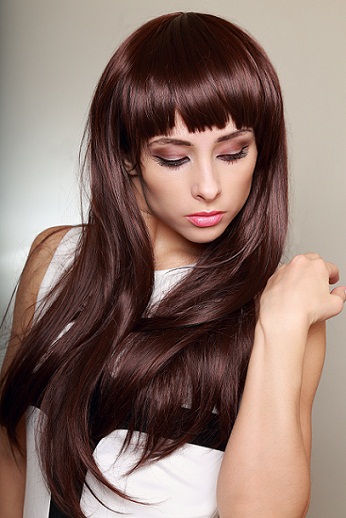 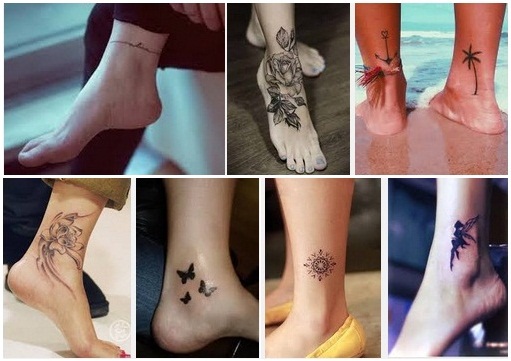