Pink Is the New Face of CoverGirl 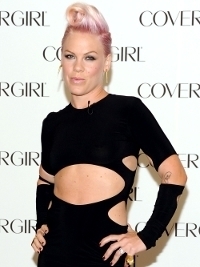 As the new season approaches, labels start bringing the big guns when it comes to advertising. While some rely on their previously chosen ambassadors, others aim for a change in perspective and even surprise us. This is exactly the feeling we got when we heard about the CoverGirl initiative to bring Pink as their spokesperson. It might seem like an unlikely pairing considering the fact the label has previously turned to icons like Taylor Swift or Sophia Vergara to represent its products and display a set of uber feminine characteristics.

Given the fact that this initiative is so different from what we have gotten used to, it will be pretty exciting to see what are the brand’s plans for the new season. So far, we’ve learned that the new campaign is set to present ‘beauty with an edge’, which is exactly the impression we got watching Pink’s style over the years along with her tongue in the cheek attitude which made the headlines numerous times. It will definitely be something memorable. The singer herself revealed the first ad campaign image on her Twitter/Instagram, proving the news was not some misguided rumor.

We can only guess that the delicate, angelic sweety-pie types of poses that have managed to become somewhat of a trademark for the label over the years will take a turn for the loud and dramatic. The first promo pic released definitely takes us in this direction featuring a myriad of bold tones which definitely don’t leave much room for blending in with the crowd. Rocking a two toned twisted pompadour that perfectly showed off her personality, the star looked extremely happy for the new partnership.

Apparently, the star will also promote a ‘bold new mascara innovation’, which is another great reason to be anxious to see the entire campaign the label has prepared for us. Also, hopefully, since it’s Pink who we are talking about, the airbrushing will be at a minimum. It would certainly be uplifting to see the ‘you but better’ concept, realistically presented for everyone. Well the curiosity and excitement levels are definitely running high, so the new ads are certainly creating the desired reaction already.

90 Most Popular Hairstyles for Men from Classic to Modern

90 Most Popular Hairstyles for Men from Classic to Modern

9 Modern Khaki Jeans For Men And Women with Images