Jaacqueline Fernandez is a Sri Lankan beauty who won the Miss Sri Lanka Universe in 2020. She started her modelling career after that and she bagged a role in Bollywood in a movie ‘Aladin’ with co-stars Ritesh Deshmukh and Amitabh Bachchan. She won the International Indian Film Academy Award for best female debut for it. Jacqueline attracts the audience with her beautiful face and her very good sense of dressing.

1. Caught at an Event Without Makeup: 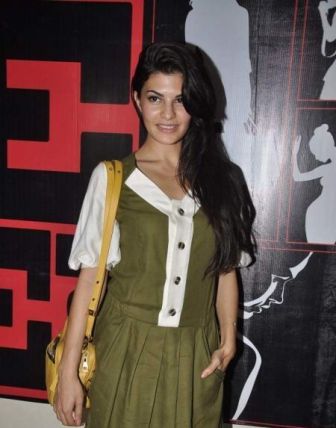 In the picture below we see the actress in a moss green dress with white in the arms and in the middle with brown buttons on it. She is carrying a yellow bag on her right shoulder and her hair is kept open and falls down her from the left of her shoulder. 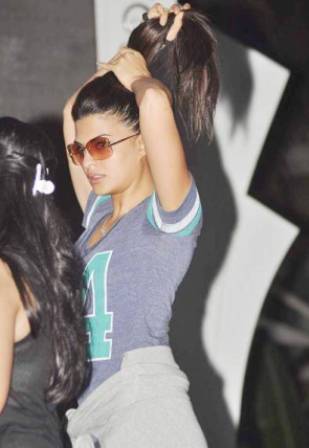 This picture is clicked while the actress was practising dance for an event. She is in sports attire, wearing a grey shirt and a jacket tied around her waist. She has a pair of brown sunglasses covering her eyes and she lifts up her straight her to tie it.

3. Working at The Laptop: 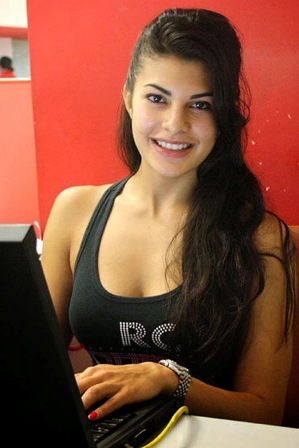 The actress smiles at the camera while she is at the laptop. She is seen wearing a sleeveless black top and her hair is clipped at the back and falls on down the left shoulder leaving a little puffed locks on the head in front. Her left hand has a silver chained wrist watch. 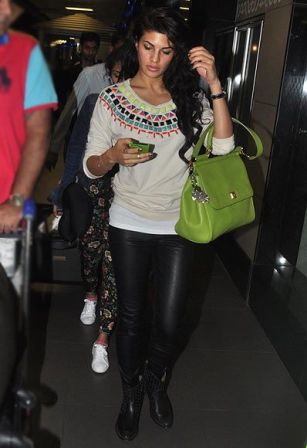 Jacqueline has a great sense of dressing which she proves in the picture below. She is wearing a stylish white top which is studded with huge beads in yellow, blue, red, black, sea-green and orange. Her bottoms are covered with narrow fitted synthetic trousers and black boots. She is carrying a green bag and the cover of her cell-phone is of a similar colour.

5. Jacqueline With Shah Rukh Khan at The Airport: 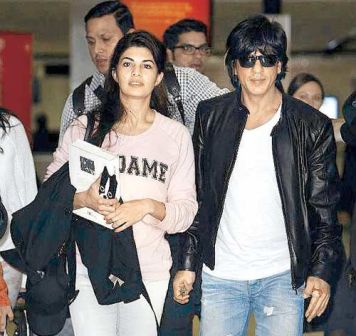 Jacqueline is seen with Shah Rukh Khan at the airport as they made their journey to Australia. The actress is a casual cream coloured t-short with a pair of white trousers and a black jacket on her hand. 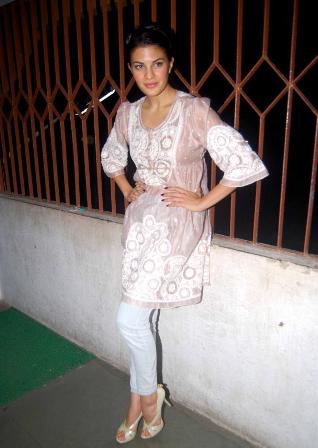 The actress is clicked at an event where she looks naturally pretty. She is wearing a white ‘kurti’ with silver prints on it and her thick hair is kept open and falls down from her left. 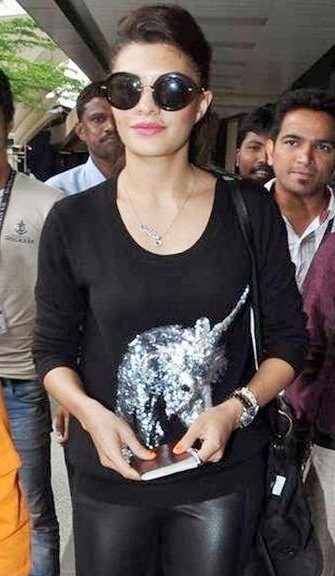 This picture was clicked at the Mumbai airport as she was going to leave for Sydney for an event. She is wearing a black top covering half of her arm with a silvery print on it and pair of black pants. Her circular sunglasses make her look trendy. She also has a black bag with her and her hair is puffed and tied as a pony.

8. Jacqueline With Madhuri Dixit at Sydney: 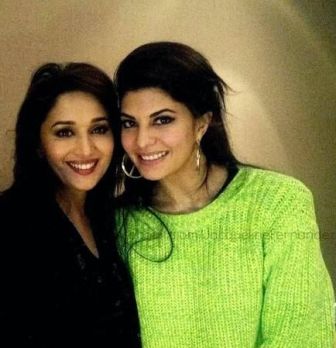 This is a picture clicked at Sydney along with actress Madhuri Dixit. They had gone there for an event Temptation Reloaded 2020. Jacqueline is wearing a light green sweat-shirt and on she ears she wears big round earrings. Her hair is back-brushed and kept open. 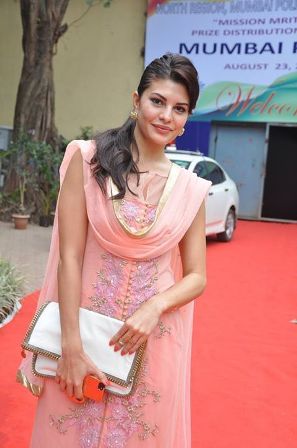 The actress is clicked in the Indian look. She is wearing a peach ‘salwar’ which has stitches on it green and mauve. She is carrying a white purse on one hand and her cell-phone on another. She is wearing golden earring on her ears and her hair is parted from one side and tied as a pony at the back. 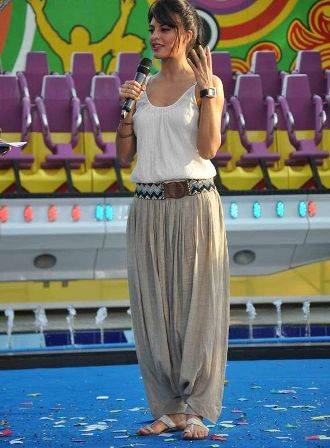 The actress talks to the people as she had gone for an event at Essel World. She looks very trendy in her white sleeveless top along with her loose palazzo pants along with a stylish belt. She has a black strapped wrist watch on her left and her hair is styled up as a pony.