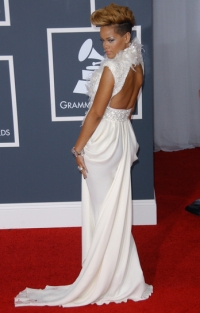 Architecture managed to enter the workshops of great designers mesmerizing them with the nobleness of accessories as ruffles. These stylish details besides adding some volume to the multitude of fabrics also serve as the best means to attract the spotlight. Celebrities who decided to embrace this fashion trend were granted with the top positions on the best dressed list.Romance and flamboyancy are fused into a single creation by designers who managed to discover the all time means to flatter all body shapes but also the secret to turn simple materials and tailoring into an art pieces.From the sparse to the piled up ruffles all managed to enchant the public with a once in a lifetime visual experience. The cascading evening gowns as well as mini-dresses all were decorated with ruffles of all sizes and textures to crown the glamorous award shows and ceremonies. Skim through the selection of most heart-pleasing ruffles red carpet fashion through the worth-admiring attires of actresses as well as music stage divas. 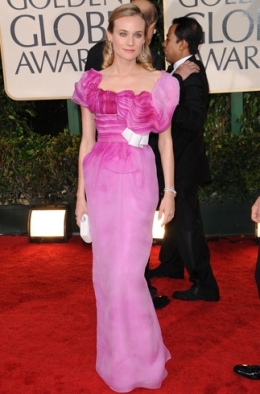 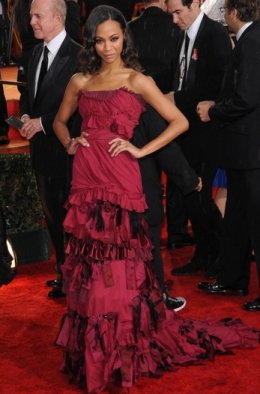 This year’s Golden Globe Awards ceremony presented a colorful and at the same time luscious parade of evening gowns. From the mini-cocktail style dresses to the long and body-conscious attires all managed to offer a unique and astonishing vision of the progress of fashion. The style trends from the runway landed on the red carpet emanating a supernatural beam of vivid as well as neutral colors decorated with stylish accessories as ruffles.

The style aspirations of fashion semi-gods is illustrated through the outstanding presence of award-winning actresses as Diane Kruger and Zoe Saldana. The apparently mono-colored dresses appeal to the layers of ruffles that undoubtedly add definition and volume to their looks. The Christian Lacroix fuchsia creation launched endless controversies as well as the Louis Vuitton dress worn by the Avatar actress. Indeed both of these designs made a statement both in tailoring as well as the chromatic palette used. 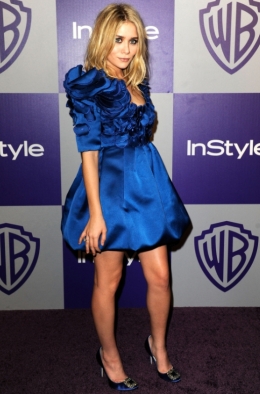 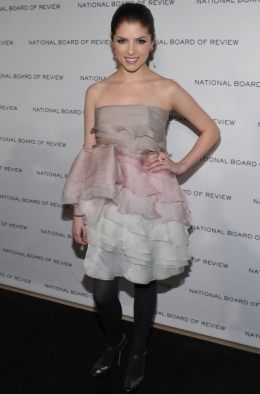 There’s no need to restrict ourselves when it comes of ruffles paired exclusively with red carpet style gowns. Instead it is also advisable to skim through the repertoire of short dresses that look just as fabulous when upgraded with these voguish details. The electric blue dress designed by Erdem and popularized by Ashley Olsen managed to grab the attention of both media and fans due to its classy still revolutionary style.

Ruffles positioned to the upper-section of the dress create a bulky look that would perfectly balance the lower-portions. In the case of the 0 size actress-designer it is an ideal combination that would enhance her silhouette with a few extra inches. On the other hand the ruffle dress presented by Anna Kendrick limits the use of this chic detail to the waist-area which grants the look with genteel delicacy further fueled by the opaque tights. 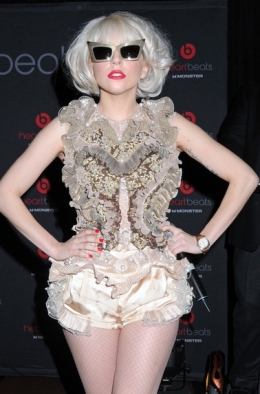 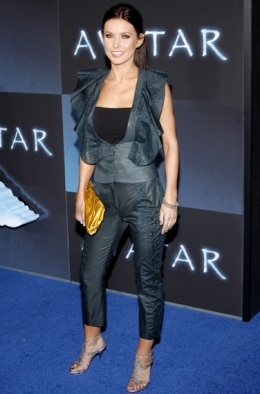 Dresses are not the only style items embellished with ruffles. Suits as well as tops are also included in the array of chic creations that echo the nostalgic aura of the past decades. The complex and artful designs as the top created by Marc Jacobs and worn by the style chameleon Lady Gaga also succeeded in earning public praise due to the refinement of minuscule details as well as the Victorian-age atmosphere it radiates.

These indeed paired with the latest short shorts trend or a n oh-so-fab pair of trousers would create a smashing impression both on and off the red carpet. Audrina Patridge adopts a moderate and less ‘haute couture’ perspective on how to embed ruffles into a stylish semi-formal look. Her Rue de Mail vest decorated with ruffle sleeves suggests a confidence and style-conscious approach to the latest trends. Opting for a similar look when organizing our attire for a formal or less ceremonial event will be the ultimate secret to steal the show.