Did you know that 21st of June is declared as the International Yoga Day? With rising awareness on Yoga, many of us have already signed up for some course or the other. Before we claim ourselves to have mastered the art, we need to know and understand the History of Yoga. From Where did Yoga begin? Who invented the art? What are the types of Yoga? and much more, there is an ocean of knowledge to learn about.

Yoga has become an inevitable part of human life, with its tentacles widespread across the world. It is now one of the most sought after classic mediums for rejuvenating the soul and body, in a wholesome way. Along with rendering physical and mental benefits, yoga is a spiritual healer as well, provided one follows it with utmost dedication and regularity. 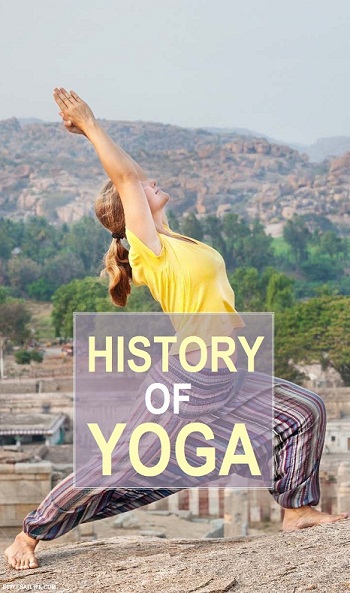 Despite the absence of string evidences to support the origin, it has been acknowledged by everyone that the roots of this beautiful art form lie deep in Indian civilization. Yoga meaning in Sanskrit is union, that means getting one with the divine power. No wonder, yoga is now one of the most accepted forms of getting closer to human souls. Allow yourself to know more about the origin of Yoga and its history.

A Brief History of Yoga:

Here is a Yoga history summary that can interest you:

Various seals collected from the remnants of Indus Valley Civilization establish the prevalence of yoga in that period itself. While scholars do suggest that the seals show close resemblances between various sitting and standing asanas, they also agree with the lack of conclusive evidences. 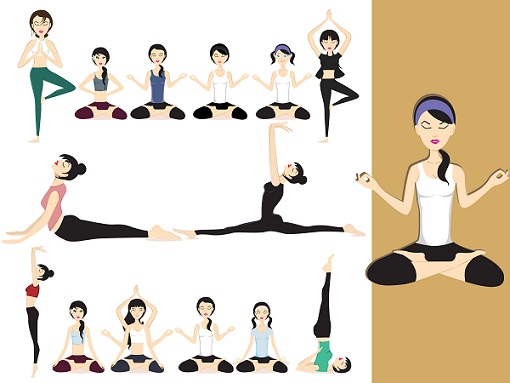 The Vedic priests used to practice various yoga asanas, solely concentrating on the soul, positioning themselves in a specific posture while performing various rites and rituals. This, as studies suggest, are precursors of modern day yoga asanas. Vedic Brahmanas as well as Atharva Veda are rich with surplus references to the practices of various breath d vital energy controlling techniques, which now are commonly known as Pranayamas and Bandhas.

The 200-odd Upanishads that came up during this era, cite, in various instances, the widespread discussions that were held about yoga in the Vedic era. These discussions were focused on three main topics – Brahman, Ataman, and the relation the two share. The term yoga was used for the first time in the Katha Upanishad, which came up during 400 BCE. Yoga, in that Scripture, has been defined as the exhibition of a strict control over the human senses with complete concentration, thus leading to a supreme state of bliss.

Upanishads also talk about nadis (veins) and the breathing techniques, however, the concept of chakras were introduced only during the eighth century. The Shvetashvatara Upanishad even talks about the relationship shared between breath and thoughts, how to gain control over the mind, and how beneficial could yoga be.

Mahabharata and Bhagavad-Gita also refer to the existence of yoga where they have been talked about as spiritual ways. In the latter, Krishna talks to Arjuna about three yoga types – karma, Jnana, and Bhakti, while the Shanti Parva of Mahabharata talks about Nirodha Yoga (Yoga of Cessation).

The period between 200 BCE and 500 BCE – the Mauryan and Gupta times – various schools of beliefs came into existence. To be more precise, Hinduism, Jainism, and Buddhism were emerging slowly, and this paved way for the development of yoga.

Raja Yoga and the various yoga sutras that came into existence with the Samkhyan and Buddhist influences have contributed immensely to today’s yoga. Patanjali is known popularly as the “compiler of the formal yoga philosophy”. 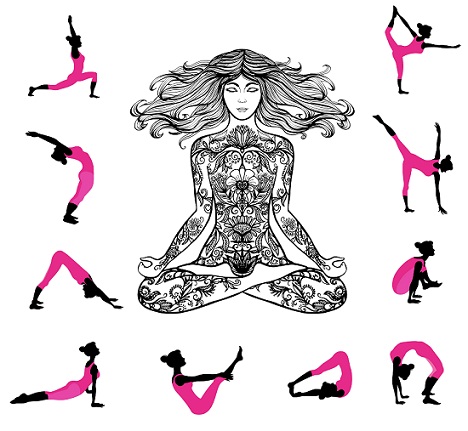 Classic Hinduism gave birth of this form of yoga which was prevalent during the Gupta period. It described yoga as a guideline or skeleton for indulging in various practices that finally led to enlightenment.

The Bhakti movement triggered by the Alvars from South India was rife across India between 12th and 15th centuries. The Vaishnava and Shaiva traditions that emerged during this period infused the concept of devotion with meditation, and thus, the Viraha Bhakti [concentration only on Lord Krishna) concept (born with Bhagavata Purana) attained more importance.

This was the time when people started to know more about Tantric influences on yoga. Tantra and yoga are two different ways of detachment from the physical world. While Tantra emphasizes complete metamorphosis of external resources, ensuring total detachment with one’s will, yoga follows the method of gradual restraint over external influences. Either way, the focus was on complete salvation through withdrawal from societal influences, either temporarily or forever.

Hatha yoga came into existence from Tantra yoga, and slowly, it emerged as the dominant way of practicing this form of art. Vimalaprabha, the Buddhist text published in 11th century, quotes about this yoga’s approach. This approach concentrated more on cleansing oneself physically and wholly before attempting complete salvation.

Sikhism also has contributed a great deal to yoga during 15th and 16th century. It was a time when the religious belief was just born. Guru Nanak, who initiated this belief, had detached himself from various Hindu practices and attached himself to Hatha yoga. Thus, came into existence the renowned Namah yoga or Sahaja yoga.

The entire outlook of yoga has undergone immense change; there are countless forms. While Hatha yoga is still among the prominent forms, there are countless forms of yoga that have born and grown up. Kundalini yoga, Tantra yoga, Nude yoga, power yoga – you name it you have the version. Yoga is not anymore considered a religious affair; it comes packed with countless benefits.

Yoga continues to flourish and spread its teachings, cutting across the stringent and impregnable boundaries of culture and language. Getting to know this beautiful art in detail is indeed beneficial. You can keep on talking about yoga… it is a never-ending and a rich topic for discussion. Start here, right away to know yoga in depth…

Here is a quick look into the most popular forms of Yoga invented across the world:

This is a blanket term that is used for all physical yoga practices. It focuses on breathing, postures and meditation. Hatha Yoga is great for relaxation and relief from physical and mental ailments.

This form of Yoga gets its name from the founder B.K.S Iyengar. It is wonderful for relief from injuries and joint diseases. This Yoga involves right alignment of body using very careful moves. It also involves many props and is great for attaining flexibility and strength.

This is one of the most complex forms of Yoga, which involves spiritual awakening. It is quite exhausting on the mind and body and involves a lot of breathing, mudras and meditation with chanting. It must be performed under the supervision of a trained Guru.

Also called the “Eight limb path”, Ashtanga Yoga is one of the most popular Yogawith celebrities. This is an advanced level Yoga, which involves many Surya namaskars and complex postures. It is also known by the term “Powder Yoga”.

This is a very complex procedure, which involves many postures. There are quick movements, where you cannot hold on to one pose for long. You need to jump from one pose to the other seamlessly, so the heart beat just goes very fast.

Originally created by Yoga Guru Bikram Choudhary, this practise is performed in a heated room of 41 degree Celsius in about 40 percent of humidity. It is a 90-minute sequence which involves 26 postures performed twice.

This is a form of Yoga developed to seek spirituality. It involved mental awareness and self-realization than physical aspects. It is done with the help of Pranayama, Deep relaxation and meditation.

It is founded in 1949 by Sharon Ganon and David Life. It guides you on the Jivamukti style of life, which involves study of Sanskrit scriptures, poetry and music, along with asanas. One needs to be a vegetarian for practicing this.

We hope these aspects of Yoga facts and history, has stirred some interest in you. Along with these traditional methods of Yoga, there are many other practices like Goat yoga, Beer Yoga, aerial yoga and other unconventional forms. These are creative Yoga practices which are created to stir interest among people and motivate them to attend the classes. However, a conventional Yoga form is always the best, as it is backed with thorough research and scientific study. If you have any other tips and facts about Yoga to share, do let us know in the comments!

1. What The Importance of Om In Yoga?

Om is a special mantra, whose sound involves a particular vibration. This sound is in rhythm with the sounds of nature like the rustling of leaves, the sound of the sea waves etc., When we chant Omkara, we gain awareness on the movements of the universe, gain control on our breath and also seek a larger connection to our soul.

2. Is it Important to Practise Vegetarianism for Yoga?

One of the principles of Yoga is Ahimsa or Nonviolence. This, however does not directly interpret to not eating meat. It mainly points out to stop inflicting any sort of self-harm like physical or mental abuse of oneself. The choice is always upto you on how you take the point. Vegetarianism is a good practise that can positively impact your body. This may be why certain Yoga practitioners suggest following it.

3. How Is Yoga Different From a Gym Workout?

A gym workout involves only physical exercises using the body, props or equipments. Yoga, on the other hand involves both physical and mental awareness. It helps in synchronizing the body with the mind and the breath to channelize our inner energy. So, you end up as a better person, filled with positive thoughts and good energy, along with a fit body.

4. Is Yoga Related To Hinduism?

No! Yoga is not associated with any religion. It is an ancient practise that was pioneered in India many centuries ago. While Yoga is interwoven on some of the philosophies of Hindium and Buddhism, it does not preach or spread them to its practitioners. You can follow your own religion with free will while practicing Yoga.

5. What Are The Things I Need to Begin Yoga?

You need a positive mind and determination to start Yoga. Keep away from fears of all kinds and enter into the class without any inhibitions. However, for comfort and flexibility, it is advisable to wear Yoga pants which are loose and breathable. Carrying a Yoga mat is mandatory. A good, soothing environment is suggested for a relaxing experience.