Is it safe to use vinegar in pregnancy? Is the question that often pops up when it comes to pregnant women who love a touch of vinegar in their food? Many say that it is useful and rich in vitamins which help the baby in developing faster and better. According a research conducted in America,it is safe to use vinegar during pregnancy.

Directly drinking vinegar while pregnant could also be dangerous because it contains an enormous amount of acetic acid. To all those women who like vinegar in their food, here are some benefits to using vinegar during pregnancy. Read all about the benefits as well as the harmful effects of vinegar when you are carrying a child. You will sure be amazed by the benefits that you never knew of! But first, what is vinegar? 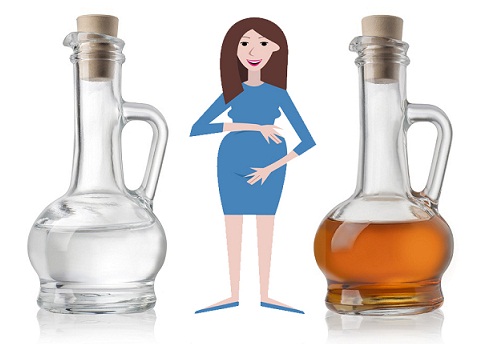 Vinegar is a liquid that contains about 5–20% acetic acid, water, and other trace chemicals, that may include flavorings. The acetic acid is produced by the fermentation of ethanol by acetic acid bacteria. Vinegar is mainly used as a cooking ingredient, or in pickling. However, there are some types of vinegar too. Here are some.

2. Red Wine Vinegar: The white and red vinegar are the common ones that are used. The red wine vinegar is used with foods like beef, pork and even vegetables. The white wine vinegar is however used for chicken and fish dishes.

3. Apple Cider: This is another popular vinegar that is mild and inexpensive. It is the one mostly used for salad dressing. It is also a good choice for marinating chicken or fish as it is only mild. Apple cider vinegar also has a lot of health and skin benefits.

4. Rice Vinegar: The mildest of all is the rice vinegar. It contains very little acidity when compared to others and is often an Asian or Chinese cooking ingredient.

5. Plain Vinegar: This is a plain distilled vinegar that is made from grain alcohol and has sharp and an unpleasant taste. It is generally used in small quantities and sometimes added to milk to make buttermilk. Besides, it is also used for cleaning purposes.

The many forms of vinegar have their own benefits. But wondering ‘can I take apple cider vinegar while pregnant?’ Here is your answer.

Apple cider vinegar has a lot of health benefits. It is often a cure to gastrointestinal issues, vaginal tract infections and even some skin conditions.

It is typically made crushed fermented apples, that are first made into alcohol and then later to acetic acid.

During pregnancy, you tend to experience indigestion, which causes discomfort. One tablespoon of apple cider vinegar mixed with glass of water will come as a huge relief.

Another common thing that occurs during pregnancy is urinary tract infection. That could be the reason why there is a smell discharge and frequent urination. Apple cider vinegar while pregnant, or even otherwise, is known to have a lot of essential enzymes and minerals that can effectively fight infection. Take 2 tablespoon of apple cider vinegar in one glass of water and drink twice daily.

In the 12-27 weeks of pregnancy, heart burns and acidity becomes a common problem to experience. Acidity now occurs due to the pressure exerted by the child on the mother’s digestive tract. This pressure leads to heart burns and acidity. Apple cider vinegar during pregnancy comes in real handy to help with this. One tablespoon of apple cider in one glass of water will solve the problem immediately.

Acne is another common problem during pregnancy. Sometimes you end up getting this on every part of your body, sometimes the breasts and arms. Apple cider vinegar will effectively curb acne problems.

However, there are also some disadvantages of using apple cider vinegar during pregnancy.

1. It was found to affect adversely when apple cider was consumed along with other drugs prescribed during pregnancy. When it comes in contact with certain drugs, it tends to lower potassium levels.
2. It also leads to erosion of the teeth enamel. Apple cider is highly acidic and this high acidic content can cause damage to your teeth and also leading to enamel erosion. When you drink it directly form a glass, your teeth makes contact directly with it and this could also lead to erosion.
3. Irritation in gums have also been reported. Apple cider vinegar is known to have caused irritation on the gums by pregnant mothers who have consumed it.

Drinking vinegar while pregnant works and gives significant positive results. Take a look at what it can do.

Pregnant women are sometimes advised to add a drop of vinegar in their morning foods to reduce nausea. Soaking a few organic bones in vinegar helps it release the calcium present. Consuming a small amount of this solution every morning helps eliminate nausea and more importantly it aids the formation and strengthening of the baby’s bones.The most common problem a woman faces during pregnancy is nausea and vinegar is helpful in reducing the effect and intensity of it.

Antioxidants are very good in general and particularly good during pregnancy. The antioxidants present in vinegar protects your cells from damage. Vinegar is rich in antioxidants, which benefits your pregnancy on a whole. It also reduces oxidative stress for both you and your baby. Being stress free during this period is a must.

Pregnant women tend to crave for high sodium foods. A high level of sodium in your body will not do you any good during pregnancy. It is highly recommended to replace the excess sodium in your diet with vinegar. Vinegar acts as a flavoring agent without increasing your sodium levels. There are different flavors of vinegar available to suit your taste, which is an added advantage.Try to avoid high sodium diets by increasing the use of vinegar in your diet.

The added good news is that vinegar can be used to test pregnancy.

It is a common thing to experience heartburn’s during pregnancy. However, vinegar with its high acetic acid content is known to increase heartburn’s and in some cases triggers heart burns. You should limit the use of vinegar if it tends to cause heartburn’s and makes you feel uncomfortable. This is not necessarily the case with all pregnant women, so watch your vinegar intake and keep it within the margin to avail its benefits.

Too much of anything is bad, the same goes for vinegar in pregnancy.There are specific foods which when taken with vinegar can cause you some serious health complications during pregnancy. Raw vegetables with vinegar peppered on top can be dangerous, and seafood especially under cooked seafood with vinegar can strongly upset your health when you’re pregnant.

Craving vinegar while pregnant? Well, that’s common! Pickles, pickled canned goods suddenly could turn to be their favorite food. Some of them have known to drink vinegar straight out of the bottle! There is a typical tendency to crave for salty and acidic foods during pregnancy. What could happen on over consumption of them would be a heartburn! Ladies, you might want to watch out for that.

Vinegar has many advantages to pregnancy. By keeping your vinegar intake away from both the extremes you can have a healthy and happy pregnancy.If you want your baby to be fit and healthy then avoid using preservatives which might be harmful for the health of the baby and start using vinegar in your diets. While we understand your intense vinegar and salty cravings, just be on the careful side to avoid any side effects!