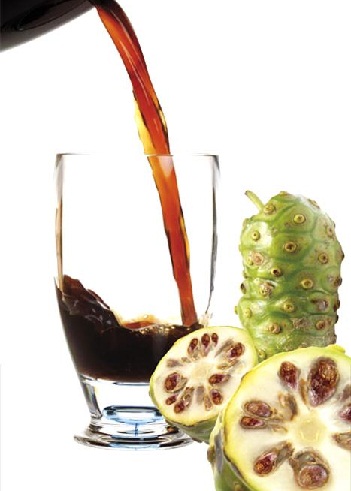 Noni is a fruit bearing; small, evergreen tree found in certain parts of India, south east of Asia, Australia and the islands of the pacific region. It is also known by other names like: Indian Mulberry, Morinda Littoralis. All the parts of the Noni tree including the leaves, bark, fruit and roots have long been used for medicinal purposes. The fruit of Noni tree has a cheese like, pebbled surface with a characteristic bad odour and taste. The flowers of Noni tree are white in colour and tubular in shape.

Medicines made from Noni have been considered fit for consumption in various forms as well as for external application. To sight a few traditional topical uses: the juice of Noni fruit is used as a skin emollient and is also believed to have anti ageing properties. The leaves of Noni tree are wrapped around arthritic joints to relieve pain and inflammation. The preparations made out of bark and roots of the Noni tree are used in treatment of various kinds of wounds and skin infections. Internal consumption of Noni in various forms has been found to be beneficial in those suffering from unstable blood pressure, diabetes, colic, cough and cold and many such other kinds of internal infections and inflammations. It is also known to boost up the immune system. The juice extracted from the Noni fruit is high in dietary fibers and carbohydrates. It is also low in fats. Studies conducted on lab mice are also in favour that regular consumption of Noni juice might help in certain varieties of cancer. The beneficial effects of Noni juice are supposed to be due to many substances that are capable of repairing cells and activating the immune system.

Use of Noni has been limited mostly to traditional or alternative medicine and is not backed by any approvals or reports from the Food and Drug association. Consumption of less than 500mg in a day has been found to be non toxic but again, there is lack of strong evidence based on clinical trials.

Side Effects of Noni Juice:

Like every coin has two sides, Noni juice also has its own set of positives as well as negatives.

Toxic effects include damage to liver. So, people with high potassium levels, kidney diseases and liver diseases must use it with lots of caution and should also consult their physician before and while consuming and type of Noni medicine.

Many side effects have been documented. The most commonly encountered non allergic reactions include: weakness, bloating, bad breath, nausea, increased menstrual flow, flatulence and occasionally loose motions. These reactions subside in most cases after reduction in dosage, usually within 3 days.

The allergic reactions might manifest in form of increased coughing, difficulty while breathing and sometimes, as rashes on the skin. This type of allergic reaction has been observed in less than ten percent of people taking Noni juice. In such cases, it is must to visit your doctor who would prescribe you anti allergic drugs and might also discontinue intake of Noni in any form.

In mild side effects, increasing the consumption of water and addition of juice of freshly squeezed lemon to Noni juice has been found to help many. This reduces bloating and indigestion resulting from Noni juice.

Also, two isolated cases of hepatitis associated with consumption of Noni juice point towards possible hepatotoxic potential of this juice. It also aggravates previously present kidney conditions due to it’s high potassium levels.  Also, it is believed to be harmful during pregnancy and lactation as traditionally, Noni juice was used to induce abortions so, might lead to miscarriage.

Other side effects occur due to interaction with the concurrent medicines that a person might be taking. For example, it can decrease the efficiency of diuretics and blood thinners.

Hope, you found the article informative.