Our body has five sensations that of the smell, sight, hear, taste and of course touch. Out of these the biggest organ present in our body is none other than the skin itself which wraps around our entire body and runs down the whole length from the top of the scalp to the underneath of the feet. The skin being a strong thick layer thus protects our body from oncoming dangers, friction protection and remedial for cuts and gashes.

At most times, the skin regenerates itself by forming blisters on the open wound or friction wound. At other time a few assistance externally is required. This skin is therefore thick enough to support 3 layers in it. The first layer is the squamous cells that belong on the top which are tightly packed. The second layer forms the basal cells and the third being the melanocytes which is the ground layer. It is this ground layer that is responsible for the production of melanin which gives an individual his or her color. 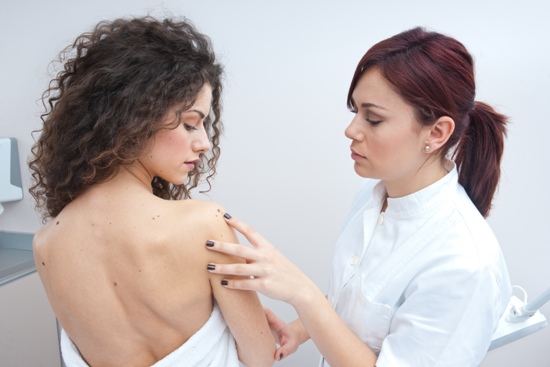 Skin cancer is the cancerous cells formed in any one of the layers of the skin at times affecting all three in the process. There are often certain molecules present in the cells that encode a genetic condition or information regarding an individual popularly known as DNA. On damage of these very elements, the cells in the skin start malfunctioning. Cancer cells are abnormal cells which are not yet fully mature enough to be considered an adult cell. Therefore their uses are half helping even if they were normal.

Due to the damaged skin cells, these abnormal cells have a reputation of fast reproduction almost twice the rate of a normal cell. But these cells don’t usually die or disintegrate like the normal cells. They just keep on crowding eventually depriving the normal cells of their place. This is the starting of cancer. Often these cells accumulate in a place and form a tumor which then can break from its mother and open a separate base somewhere thereby successfully spreading the cancer cells.

There are Mainly Two Different Types of Skin Cancer :

The keratinocyte cancer deals with the basal and squamous cells in the skin. This is the most common type of skin cancer according to the doctor where the cancer type etched its name from the cells keratinocyte where the cancer cells form. The other kind is melanomas, which is cancer of the lowest layer where the pigmentations take place. Even though the melanoma cancer is very rare it is more deadly than the former cells but curable if caught in its early stages. There are also many rare types of skin cancers such as the merkel cell carcinoma or cutaneous lymphoma etc. For most of the cancer conditions there is mostly a symptom on the top most squamous cell layer.

Causes And Symptoms Of Skin Cancer:

Given below are the main symptoms and causes of skin cancer.

The Various Causes for Skin Cancer can be Briefed Into

The nuclear reaction of Hiroshima Nagasaki reported the survivors increasing and alarming risk of skin cancer which was being multiplied every other second as more and more survivors joined the skin cancer camp. The reason formulated by the doctor’s blame the nasty radiation the reason why skin cancer cells were proliferating by the second. Later it was proven that exposure to certain types of alarming radiation can cause skin cancer.

One of the most common and prominent reason for skin cancer to grow is the only source of our vitamin D, the sun. even though it is the light giver of the earth, the sun is the source of UV rays in the earth, a type of radiation that our skin is not compatible with. As a result a lot of side effects emerge some of them being dark patches in the skin, premature ageing and wrinkling of young skin, sunburn and the most importantly all these reactions combine to form a high risk of skin cancer.

Researches conducted revealed that the white skin cells in our body at a certain point of time during our childhood destroy themselves on exposure to sun. Later in their adult life, these very damaged cells turn cancerous.  However chances of skin cancer are directly related to the mount of exposure to sun and the type of exposure to UV radiation.

The presence of Moles also known as dysplastic nevi, also puts the person at higher risk of skin cancer. Some of these moles look abnormal and tend to be bigger than the normal ones. These abnormal moles are more likely to be cancerous.

Skin cancer can develop regardless of the pigmentation of skin, however people with fair skin show increased chances towards the same. People with fair skin have less pigment and therefore are more susceptible to damages caused by UV radiations. This therefore increases the chances of skin cancer, as compared to those with darker skin tone.

It has been found that people with Psoriasis are at higher risk of developing skin cancer. However it does not mean that every case of Psoriasis may lead to skin cancer. The treatments used for Psoriasis like PUVA (Psoralen Ultraviolet Light Treatment) increase the susceptibility for melanoma skin cancer.

Xeroderma Pigmentosum is a rare genetic skin condition that is present from the time of birth. However a variant of this Xeroderma Pigmentosum condition does not show up in the early years. People with such conditions cannot repair their skin when exposed to sun. They must therefore avoid exposure to Sun and other UV light sources. Hence such individuals are most likely to develop skin cancer.

According to various studies conducted, it has been known that people with weaker immune system have increased susceptibility towards skin cancer. This also includes people undergoing organ transplant who need to take immunosuppressant drugs and also those infected with HIV/AIDS. Such individuals should regularly check with a skin specialist to look out for early symptoms of skin cancer.

Birthmarks are nothing but colored spots on the skin that may be caused due to different factors. In medical terminology, it is referred as ‘Congenital Nevus’. The formation of birthmarks can be restricted to the outside layer or sometimes it may penetrate to the deeper layers. Common birthmarks like strawberry marks and port wine stains are least likely to develop into cancer. However some birthmarks formed in the outer layer of skin can turn out be cancerous. Such cancerous cells are easily removed through surgery.

It has been found that prolonged contact with specific chemicals can also turn out to be one of the causes of skin cancer. Some the chemicals in this category includes Creosote, Soot, Arsenic, Coal Tar, Pitch, Shale Oils and some Petroleum Products like motor oil or mineral oil.

Skin Cancer is the most common occurrence of cancer these days. There are different types of skin cancer symptoms. However these symptoms are often misdiagnosed leaving it difficult for people to even realise it.

Signs And Symptoms Of Skin Cancer:

Given below are 10 signs and symptoms of skin cancer that are useful to find out disease early.

The squamous cell being the top most area is the most affected area when it comes to skin cancer. It is directly exposed to all the radiation and most of the time cancer in the inner layers of the cell may even find a way to expose themselves through the top most layer squamous cells. This cells cause cancer in some particular area, especially the ones exposed to sun the most, for example the face, the ears, the hands, or part of the chest, legs maybe at times for both men and women. The symptoms to this are the crusting of the affected area where the skin becomes flaky and peeling with a soft crust almost like the scales of a fish. There is also formation of small red rashes or lump like nodules spread over the affected area.

See More: What Are The Symptoms Of Ovarian Cancer

This layer is usually protected by the top most layers, the squamous layer but still focuses mainly the sun exposed area. The radiation is so strong, that the scientists say it can perforate the top most layers to reach to the second thereby affecting the cells there. Unlike the top layer, this layer shows the presence of pearly white bumps which are sticky and waxy in nature. Along with this appear the brown patches on the skin which are rich in color but small only affecting the place.

Bowen disease is another kind of squamous cell carcinoma that spreads outward from the surface of the skin. They appear as reddish and scaly patches that can even exhibit a crusty appearance. Bowen Disease should not be mistaken for eczema, psoriasis, fungus or normal rash. It should be treated immediately after consulting a dermatologist.

These layers form at the ground level of the skin and if treated properly can be reduced and cured. The symptoms are the same. The appearance of brown freckle like patches which is dark in color, and formation of nodule like spots are some of the examples.

Actinic Cheilitis, also known as farmer’s lip can turn to be precancerous condition that is spotted on the lower lips. It is marked by scaly patches and causes constant roughness of the lips. Some of the other common symptoms that occur during Actinic Cheilitis is presence of prominent lip lines, swelling of the lips and fading borders between the skin and lips. Therefore such skin conditions should be immediately treated.

These are other common symptoms of skin cancer. Atypical moles need to be treated immediately. Although in their first appearance, these moles may not look cancerous, but they can turn into one after few years. Such moles are most commonly found in the areas of skin that are largely exposed to sun. Atypical moles have irregular shape, are comparatively larger and have fading borders. They may appear raised or flat on the surface of the skin.

This is a very common occurrence in people. The presence of shiny raised area is one of the early skin cancer symptoms. They may appear to be red, brown, and black or may even show milky white appearance. The color of this shiny raised area however depends on the natural pigmentation of the skin. They should not be ignored as regular mole and must be treated immediately. Visit a dermatologist immediately when you come across these shiny raised areas on your skin.

Cutaneous horn appear as funnel shaped growth that protrude from the red base of the skin. These are normally made of keratin and there are varied forms of cutaneous horn found on the skin. They vary in their size or shape and are commonly spotted in people with fairer skin. Cutaneous horn can develop anywhere on the body, including neck and nose.

These are another common signs for skin cancer. Persistent open pores often bleed or form crusts on the surface of the skin. They can surface anywhere on the body including the arms, neck, back and legs. As you encounter such pores in your skin, it’s time to immediately consult a good dermatologist. If left untreated, these persistent open pores can develop into basal cell carcinomas. These kinds of carcinomas can then accelerate the progress of skin cancer.