Pregnancy, the sweetest word for a woman is also sometimes the most challenging period of a woman’s life. There are times when you love your body, and there are times when you hate your body entirely. The most prevalent problem is the constant consumption of tasteless, bland food during pregnancy. Also, there are periods when satisfied cravings need to be satisfied. And the most common desire is for spicy food. Pregnant women become a mystery due to their changing habits and tastes. Black pepper for pregnancy can be used to satiate the cravings for tasty food and has some advantages. It not only spices up the bland food but also provides you with some health benefits. That help the future mother post pregnancy.

In India, black pepper is commonly known by the name of kaali mirch. This name translates to hot chilli. A ubiquitous condiment in almost all cuisines. Hot pepper can be considered an excellent medicine that cures some problems that usually trouble a pregnant woman. 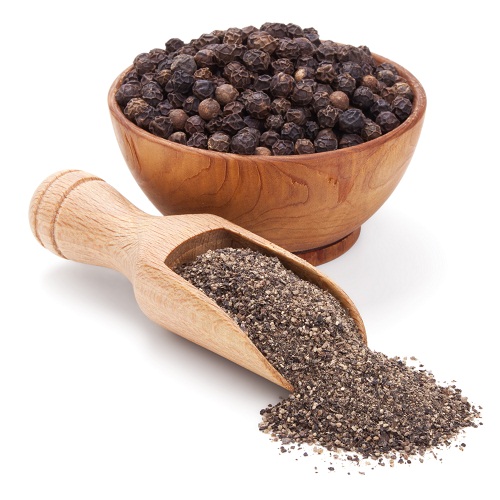 What Are Black Pepper And Its Other Names?

Black pepper also goes by the name of Piper nigrum. It is cultivated and dried to be used as a spice and traditional medicine. Black pepper is being propagated from the still-green. Unripe drupes of the pepper plant. Vietnam is the largest exporter of black pepper. While pepper originally belongs to south India. It also goes by various other names like kali mirch, hot pepper, and miriyalu, etc.

Black pepper (scientific name: Piper nigrum) has a lot of nutritional value. Every 100 grams of black pepper comprises energy worth 251 calories. It has a sodium content of 20 mg and a fat content of 3.3 g. The common minerals are Vitamin A (10%), Iron (53%), Calcium (44%), Magnesium (42%), and Vitamin B-6 (15%). Every 100 g of black pepper has about 64 g of carbohydrates and about 10 g of protein. The potassium content is about 1,329 mg. There is no cholesterol content in black pepper. Hence hot pepper and pregnancy go well totally.

Is Black Pepper Safe During Pregnancy?

Any woman’s pregnancy is filled with some bodily ailments, unusual cravings, and many mood swings. Pregnancy is not a good time to be near a future mother. The biggest need is for spicy food, and the usage of black pepper in pregnancy can quickly solve this in the food. That is going to be served to pregnant women. The biggest concern that arises is the safety.

How Is It Good For A Pregnant?

If consumed in moderation. It is entirely harmless for the sore body of the future mother. When it is being used in combination with other spices. Like cumin as a seasoning for fruits, vegetables and salads, black pepper die wonders to any pregnant woman’s body. However, consumers should be in moderation as excessive black pepper in the body. Causes a burning sensation and might even cause acidity.

A lot of discussions have been happening on the topic of black pepper and pregnancy. While some people believe that adding too much of spice to a pregnant woman’s diet. Is not good for the baby, there is no possible evidence for the same. You can easily eat kali mirch in pregnancy. Provided you consume this wonder spice in moderation and do not consume in excess. Read on to know the facts about black pepper in pregnancy. And, how beneficial eating black pepper during pregnancy can be.

Benefits of Black Pepper During Pregnancy:

During pregnancy, gastric troubles along with acidity or a constant burning sensation are quite common. And the expecting mother has to eat bland meals. Which are usually not very appealing. The meals become tasteless, and the future mother loses interest in eating. It might prove to be highly dangerous as a future mother. Needs nutrition both for herself as well as the developing fetus. The additional small amount of black pepper in pregnancy to your prepared food will not only enhance the flavour. But it also provides a host of health benefits for the mother and baby both. Your will to eat will also return, and you can enjoy some delicious as well as a nutritious food. Some benefits of consuming black pepper during pregnancy are mentioned as below:

The functioning of our digestive system tends to slow down during pregnancy. Due to the various other bodily functions that take place during your pregnancy. Adding black pepper for pregnancy to your diet at such a sensitive time can help to improve your digestion. Besides offering a relief from gas, bloating and cramps.

2. Works As A Natural Remedy For Cough and Cold:

The re-occurring cough and cold during the pregnancy period. Can be very discomforting as taking medications for the same is also not advisable.

Moreover, it causes discomfort and causes the mother to become irritable. Pepper is generally used as a natural remedy to treat cough and cold in normal human beings also.

3. Is A Very Good Source of Folate:

Folate is an essential nutrient during pregnancy. That prevents the occurrence of neural tube defect in your baby. Black pepper, along with other varieties of peppers is a powerhouse of folate or folic acid. Consumption of black pepper in moderation. Can prove to be a great addition to your natural diet. And, you might incorporate it into your healthy diet post pregnancy.

4. Helps to boost the Immune System:

The immune system of a woman during the pregnancy period is weakened. Thereby making it susceptible to infections. In such a situation, a lot of medicine is also not prescribed to the future mother. Black pepper can prove to be a great natural remedy in such a case. Vitamin C, which is present in black pepper for pregnancy, helps to boost the immune system of the body.

Black pepper contains a high content of potassium. Which helps to keep a check on the blood pressure. During pregnancy, high blood pressure can pose serious health problems. It can also affect the developing fetus. Hence the addition of black pepper for your pregnancy diet. You can prevent preeclampsia and hypertension, and you are guaranteed to keep your fetus healthy.

6. Acts As A Natural Anti-Depressant:

A pregnant woman is prone to depression and anxiety caused due to significant changes. Which take place within the body. It is not advisable to take medications for the same as it may harm the baby. The simplest remedy to come out of your pregnancy blues is by adding black pepper to your diet.

Various skin problems like acne and pimples are widespread during the pregnancy period. These skin ailments are mainly caused due to the hormonal changes in the body. A simple way to treat such condition is adding black pepper to your daily diet. Black pepper in pregnancy possesses beneficial properties that render your skin smooth and blemish free. It does not hurt to look good in a situation where you are struggling hard with your body.

During pregnancy, a woman’s body undergoes a significant transformation. Hence, these changes can sometimes lead to oxidative damages that in turn, can cause cancer in the future. Pepper is a good source of carotenoids that function as an excellent antioxidant. Thereby helping in preventing any DNA damage and therefore, safely guards both the mother and the developing fetus against deadly diseases like cancer.

So you know that a dash of pepper in your food during pregnancy. Will not harm your health as well as it might pose potential harm to your developing baby. However, this does not imply that you can use it quantitatively. Using black pepper in pregnancy is proportioned amounts is safe. And, if you still have any queries, speak to your healthcare adviser.

Side effects of Black Pepper in Pregnancy:

Now that you have discovered a wonderful seasoning. That can help you in more than one way during your pregnancy. You must be itching to use this wonder spice as soon as possible. However, you must be fully aware of the disadvantages of black pepper as well as the harms that can be caused by the improper use of black pepper during pregnancy.

How to use black pepper during pregnancy?

Black pepper and pregnancy can be considered a right combination. There are multiple benefits of this wonder condiment, and there is more than one way to include black pepper in your diet.

It can be consumed together with healthy food and can be mixed in like any other spice. A mixture of honey and black pepper in lukewarm water is also a popular option. Black pepper during pregnancy can also be added to soups and salads as modes of seasoning. When used in combination with other spices, natural health benefits are enhanced.

As we know, pregnancy is a complicated period. And, it is essential to know about each and everything you consume in detail. Now that you are entirely aware of all aspects of the consumption of black pepper. i.e. kaali mirch during pregnancy. We are pretty sure that you are going to use these methods to feel better during your pregnancy. And get enriched with some nutritional benefits of hot pepper.

So what are you waiting for? Gear up for some experimentation and delve into this out of the world combination of black pepper and pregnancy.

Q1. Is it okay to include kaali mirch in other food items regularly to consume during pregnancy?

Ans: Kaali mirch during pregnancy is considered as an excellent source of certain vital nutrients. Which are necessarily required by our body during the pregnancy period. It is also rich in various vitamins like vitamin C and vitamin K, to name a few. It also have essential minerals like iron, calcium, magnesium, Potassium, and copper. Hence, it is considered as an excellent source of anti-oxidants as well. These properties of kali mirch make it a unique food item. Which is a must to be consumed and to be used during the time of pregnancy.

Ans: Black pepper is considered as an excellent source of certain vital nutrients. It is completely enriched with vitamins like vitamin C and vitamin K. Black pepper also contains essential minerals like iron, calcium, magnesium, Potassium, and copper. It is an excellent source of anti-oxidants also. All these properties make it beneficial in reducing blood pressure during pregnancy.

Q3. How does pepper facilitate digestion during the pregnancy period?

Ans: The protruding uterus in the pregnancy period presses against the digestive organs. And, thus results in various problems like acidity, indigestion, and heartburn. Hence, one of the natural ways of fighting against this problem during pregnancy. Is to include pepper in the diet regularly.